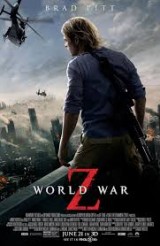 A sincere if flawed attempt to get a great, sprawling book onto the screen

First things first. Max Brooks’ novel WORLD WAR Z is a wonderful book that stands up to repeated readings. In straight-faced fashion, WORLD WAR Z is told via a series of interviews conducted by a United Nations researcher with people all over the world following a planetary plague of the walking dead, or zombies. Brooks’ unnamed interviewer goes everywhere and talks to everyone – a doctor in China who was one of the first to encounter the outbreak, a white-collar worker in India who attempted to flee via a Canadian Coast Guard vessel, a U.S. soldier on the front lines, an African social strategist, a private security contractor who saw his gig turn into a bloodbath because of the actions of the living, rather than the dead.

Brooks’ text is a riveting work and the only way to do anything resembling a faithful adaptation would be via a miniseries the size of THE WINDS OF WAR. A feature film can’t hope to capture the scope of the book, but the movie WORLD WAR Z attempts to at least get some of the geographic, big-scale nature of the material onto the screen.

In one of many nods to the book, the main character is still affiliated with the United Nations, or at least he was and will be. Our hero Gerry Lane (Brad Pitt) is a former U.N. employee who used to get sent to hot zones, but is now living happily in quiet suburbia with loving wife Karen (Mireille Enos) and their two young daughters (Sterling Jerins, Abigail Hargrove). Driving through downtown Philadelphia on the way to a family vacation, the Lanes are stuck in a traffic jam that turns out to be caused by a massive zombie attack. Gerry’s old bosses reach out to him, as it is hoped that finding the source of the zombie epidemic may provide a cure. Assured that his family will be safe if – and only if – he cooperates, Gerry sets out on a quest that takes him all over the globe.

The actors are all good, with some big names like Matthew Fox and David Morse showing up briefly but effectively, and international actors like Daniella Kertesz, as a highly sympathetic Israeli soldier and Fana Mokoena, as Gerry’s chief U.N. contact, adding verisimilitude to the global concept. Ludi Boeken plays the crucial role of Jurgen Warmbrunn, who gets to say a few speeches kept from Brooks’ novel, and Elyes Gabel finds a way to make exposition sound like playful optimism as a virologist.

One of the points of the novel is that a global problem requires a massive human response. Granted, the film doesn’t posit that a single person saves the world, but it does come up with aspects of the zombie plague that aren’t in the book that allow for solutions likewise new to the screen adaptation. This would be fine if the climax were better executed, but simply going from spectacle to small specifics doesn’t necessarily equate with heightened suspense, as it doesn’t here. Then there are some belief-straining whoppers, such as that circling helicopters (piloted by soldiers well aware of the living dead) wouldn’t detect a mass of zombies gathering until they pose a whole new kind of threat. Then there is a timing issue. If infection/turning takes place anywhere between twelve seconds and ten minutes, the idea of airplanes as “a perfect delivery system” of moving the plague from one place to another is nonsense – planes (no spoiler, it’s in the trailer) can’t stay in the air very long carrying turned passengers. (In the book, people can survive for days and hide their condition long enough to die and revive anywhere.)

However, fans of the book can see where the filmmakers are trying to at least nod to source elements. The “first case” story has been moved from Chinato Korea, but the sense of it is still there, the Israeli wall remains, there’s a disorienting plane crash and more. There’s also what seems to be an homage to an early scene in the 2004 DAWN OF THE DEAD remake, where a sleepy couple are awakened by a little girl invading the bedroom, though in this case, the entry is benign rather than homicidal.

From the standpoint of the zombie horror genre, WORLD WAR Z is novel for several reasons. First of all, it by far the biggest-budget zombie movie made so far. Secondly, and perhaps more interesting, it’s one of the very few zombie films told from the viewpoint of people who have some information and are trying to stop the virus, rather than a group of confused, terrified people who are simply trying to survive. George Romero, who invented the zombie genre, does deal with military intervention in his original DAWN OF THE DEAD, but the soldiers spend most of the film separated from any contact with their unit, and in DAY OF THE DEAD, but this is not the genre standard.

The climax encapsulates a lot of what is wrong with the movie, as it seems evident that the filmmakers who had ultimate say don’t have a good grasp of movie horror, or even what makes a particular scene scary.

Horror fans may blink at the film’s PG-13 rating as well, but it’s warranted – there’s less gore here than in any episode of THE WALKING DEAD, no noticeable strong language and no nudity. In fact, if one happens to be unfamiliar with zombie lore (not that many audience members will fall into that category), the visuals in the film will not enlighten you as to what they do to their victims. WORLD WAR Z didn’t need to be a splatter-fest, but for the genre, it seems over-sanitized.

Still, there are virtues here. The spectacle of rushing masses of zombies ramping up and over walls, buses, helicopters and the like is heady, and the first two thirds of the film, where everybody is trying to figure out how to get from Point A to Point B without being infected, have momentum. It’s also just a pleasure for fans to see the genre get some production values love.

WORLD WAR Z is an okay movie. For something great, read the book.