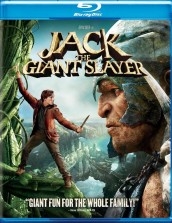 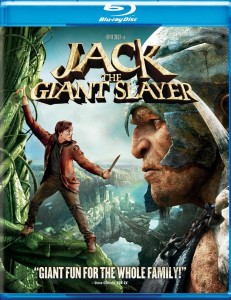 JACK THE GIANT SLAYER – As big sprawling CG laden films go, JACK THE GIANT SLAYER isn’t a bad movie at all. If you are looking for something that takes the fable of Jack and the beanstalk to an intellectual or heavy plot driven means, this won’t be for you at all. The plot is simple: a war between man and giants that has been quiet for a number of years (so much so that giants are just told in fairy tales) reignites when magical beans create a sky high beanstalk. Humans climb the big vegetable vine and find a race of giants that have been living peacefully for years. Of course, when they get there the giants are welcome to the people they have known as their enemies and fighting breaks out early and often as humans are seen as food while some want to control the giants for their own gains.

With you love CG action films, this will be right up your alley because there are plenty of action rich moments with sometimes awkward looking giants pounding about and creating havoc everywhere. On Blu-ray it looks that much better because anything with CG always seems to look better in high def. With Warner Bros doing the action, they spared no expense so it looks good and the acting is sufficient enough to pass that most families without small children will enjoy. Lots of stuff on the Blu-ray package including a complete interactive experience along with deleted scenes and a gag reel. 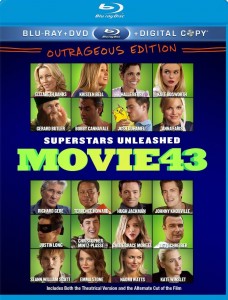 MOVIE 43 – Take virtually every famous actor currently acting in Hollywood and put them in one movie filled with a series of vignette’s about vulgar stuff and one-liners that end up being sometimes funny but often times just falling flat. There isn’t much plot here as it is more just an attempt to grab a bunch of famous people and have them do stupid stuff on camera in the vein of being original or new. It really isn’t. Think a far less funny version of the KENTUCKY FRIEND MOVIE or AMAZON WOMEN ON THE MOON. Now I love crude humor and obviously love nudity in films but at least some substance is needed in order to enjoy the overall feel the film and it just doesn’t have it here. However, with Elizabeth Banks, Halle Berry, Gerard Butler, Josh Buhamel, Anna Faris, Kate Bosworth, Kristen Bell, Richard Gere, Hugh Jackman, Emma Stone, Naomi Watts, Kate Winslet, Live Schreiber, Chloe Grace Moretz and many more it might be worth checking out just for novelty. 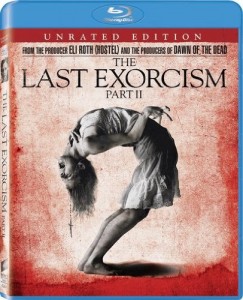 THE LAST EXORCISM PART II – I’ll just skip the irony of having something with “last” in the title having a Part II. Sequels to horror films rarely work. Unless it has a FRIDAY THE 13TH in the title or a NIGHTMARE or HALLOWEEN, generally there isn’t much that works as well as the original. The original THE LAST EXORCISM was a pretty cool take on the whole genre with a weird cultish twist that threw everything into question what we had seen during the entire movie. This just doesn’t even come close to what the original brought as nearly all the kills are off-screen, there is little to no scares or even any creepy tension that the first had in spades. While some of the ideas are interesting, they just aren’t delivered well enough to generate a good movie and it ends up falling flat on its demonic face – which there are little of as well (come on, an exorcism movie without a major possession?). 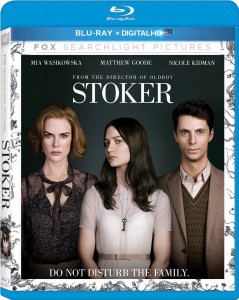 STOKER – Park Chan-wook, made famous by his revenge films of OLDBOY and LADY VENGEANCE takes his unique blend of filmmaking to the U.S. with this poised and tense psychodrama about a family that suffers a tragedy only to have an interesting uncle come into their lives and move in. The uncle brings a new sense of danger and excitement into the family as he plays with the emotions of family with his handsome demeanor and ulterior motives. It is a very cool psychological study on the darker side of human nature with excellent performances from Nicole Kidman, Mia Wasikowska and Matthew Goode. It is a small film but one with a great cast and well acted. Definitely worth checking out if you are into psycho dramas that keep you guessing and lots of cool twists and turns. 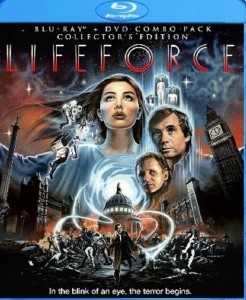 LIFEFORCE – Probably you’d remember LIFEFORCE best as the movie where a naked chick runs around kissing a slew of men and then stealing their energy from them. Yes, this is that movie where the amazing Mathilda May spends more time in her birthday suit than she does in clothes (or in the body of Patrick Stewart). Of course, that is part of the reason I simply love LIFEFORCE. But beyond the gratuitous nudity, there is a pretty good story here with space vampires coming to Earth in order to harvest as many souls (or energy) they can before leaving the solar system stored inside a comet. While the ending turns into a zombie-type apocalypse, the build-up to this is wrought with an interesting interrogation and mystery and did I mention plenty of nudity? Scream Factory (the horror branch of Shout!) has done it again with a brilliant remastering of this classic to high definition with its debut on Blu-ray. Well worth picking up. 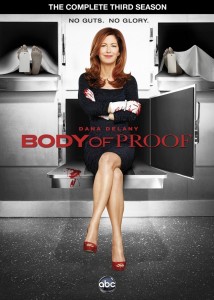 BODY OF PROOF: THE COMPLETE THIRD SEASON – Although this show has been officially given the unceremonious boot off network television, the show definitely has its followers as shown by the rabid reaction that was given on Twitter when it was announced it wasn’t coming back. The murder mystery series stars Dana Delany as the head investigator into some pretty gnarly homicides while dealing with a number of personal issues including her own relationships and family. Also starring Jeri Ryan, the show doesn’t lack the eye candy and also the mysteries are pretty cool and obviously fans will want to pick this up right away for posterity. Included in the DVD set are four pretty cool featurettes that focus on the show’s props, visual effects, cinematography and the obligatory blooper reel. 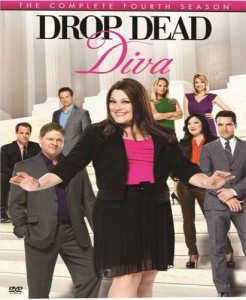 DROP DEAD DIVA: THE COMPLETE FOURTH SEASON – Lifetime’s original series about a hot chick that dies only to get reincarnated into the body of a heavy set attorney returns for another season this summer for Season 5. So now is the perfect time to catch up on what you missed in the previous season with all 13 episodes of the fourth season. Starring Brooke Elliott and Margaret Cho, the show is funny as well as does a pretty good focus on the courtroom that is the focus of every episode along with the woman dealing with having to be a skinny chick trapped inside a heavy woman. Obviously being on for an upcoming five season people enjoy this series and this is a must-have for fans that enjoy it.