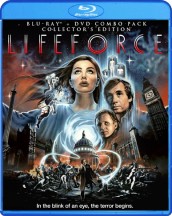 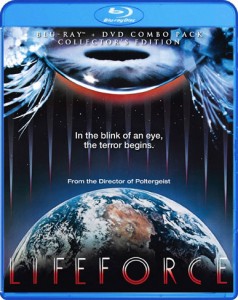 After the success of POLTERGEIST, director Tobe Hooper was poised for studio stardom. However, instead of parlaying that success into something substantial, he opted to helm 1985’s listless LIFEFORCE.

Based on the Colin Wilson novel SPACE VAMPIRES, the movie itself should have been epic. It deals with a crew of astronauts entering Haley’s Comet and finding life forms inside it. It turns out these life forms are space vampires and need the life force of humans to live.

The film is highly sexualized, and even digresses into a full out zombie-esque movie by the end, but the acting is leaden, the scripting quite stiff and Hooper’s direction uninspired.

It’s a shame, because there are elements of LIFEFORCE that crackle with originality. The make-up effects of the emaciated people who have been sucked dry are still quite impressive all these years later and the striking Mathilda May is still hot as the naked space vampires.

There’s even some weirdness mid-way through with Patrick Stewart who later went on to STAR TREK: THE NEXT GENERATION fame.

Yet, none of it comes together as a complete whole, despite it’s intentions to be boldly different and quasi-groundbreaking.

Part of the problem is the budget. Even though there are some impressive effects, the movie itself feels small (and felt small back then). It was a Cannon Film, which was a low-budget outfit in the 1980s that specialized in exploitation films and used this model even with its bigger budgeted films.

That, is likely one of the reasons the movie never really transcends beyond a low budget horror film (with some quasi-A-list special visual effects).

The Collector’s Edition as a package, is just as impressive as most of the Scream! Factory output. Not only do we get the European Cut of the film which is longer and more complete, but also the truncated U.S. release. I always thought seeing the full version would open my eyes to a better movie, but alas, the movie just feels padded at its longer length, even though the extended director’s cut is much better paced in the opening fifteen minutes.

The extras are plentiful, including a new interview with May, who surprisingly is still visibly upset that she is most remembered as the naked woman from LIFEFORCE – a fact that haunts her to this day. It’s surprising that she was game for the interview, but the interview treats her with respect and allows her to tell her tale in a rather honest and forthcoming way – something special edition Blu-ray’s rarely are allowed the luxury of.

Also included is a brand new retrospective featuring Steve Railsback and Tobe Hopper, the requisite theatrical and TV trailers, still gallery and a vintage “Making of Lifeforce” featurette. Plus, the Blu-ray also includes a DVD in the package as well.

Sadly, LIFEFORCE is a movie that should have been better and might have been better, but it just wasn’t in the cards. That said, time has been a bit better to it, because even with its failures, it’s still far more entertaining than many genre films made today. I guess noble failures, can seem like diamonds in a rough when everything since then has become far worse. If any movie is clamoring for a remake, it’s this film.

I feel bad for Hooper, because he is a considerable talent, and LIFEFORCE really could have solidified him as a major Hollywood player. Unfortunately, it was all downhill from there as he traversed into helming smaller and smaller films.

LIFEFORCE is worth a look, and with this value priced Blu-ray (you get a DVD as well), it’s well worth owning, if not to have a complete Scream! Factory set of these wonderful reissues lining your shelf.

To get a free limited edition LIFEFORCE poster, purchase from the SCREAM! Factory website