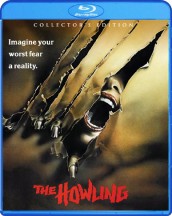 The other great 1981 werewolf movie finally arrives on Blu-ray 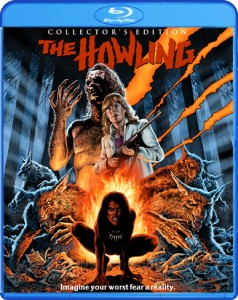 While AN AMERICAN WEREWOLF IN LONDON gets kudos as the ground-breaking werewolf movie from 1981 (and rightfully so, because it’s a great movie), some people forget that THE HOWLING came out in 1981 and was just as ground-breaking and entertaining.

The two films work in tandem as great examples of excellent genre filmmaking from two rising directors of the time (John Landis and Joe Dante).

THE HOWLING was the cheaper film of the two, but it also really tweaks the werewolf concept by including multiple werewolves, a sick sense of humor and a story that is actually quite original.

Scripted by John Sayles and Terence H. Winkless based on a novel by Gary Bradner, it follows TV news reporter Karen White (Dee Wallace) as she investigates a mysterious serial killer named Eddie Quist (Robert Picardo). This leads her to a seedy adults only store where Quist is shot to death by the police before she becomes Quist’s latest victim.

The trauma of this event wrecks havoc on Karen’s psyche, and psychologist Dr. Waggner (Patrick Macnee) suggests she and her husband Bill (Christopher Stone) visit his commune called The Colony up the California Coast.

It seems like an idyllic place at first, but soon a secret is revealed – it’s a Colony of werewolves, and they’re trying to indoctrinate Karen and her husband into the fold. Her husband ends up a wolf first, while cheating on her with sexy nympho werewolf Marsha (Elisabeth Brooks).

The rest of the movie becomes a cat and mouse game as Karen gets closer and closer to the truth putting herself and her fellow news reporter friends in danger.

There is tons to like about the THE HOWLING, from the dark humor, the excellent performance by Wallace and the great effects by Rob Bottin which are just as impressive as the Rick Baker transformation in AN AMERICAN WEREWOLF (Baker consulted on this picture before leaving for LONDON, so the similarities make sense).

Dante also manages to create a wonderful atmosphere, both scary and spooky, but also comedic at times. He gets great performances from everyone, including the amazing supporting cast featuring Kevin McCarthy, Slim Pickens and John Carradine.

Scream! Factory has done an amazing job with the new transfer on this Blu-ray Collector’s Edition. It looks even better than the MGM release from ten years ago. The special features include archival commentary by director Dante, Wallace, Stone and Picardo, a multi-part making of documentary, some great deleted scenes and outtakes that would have actually slowed the fast-pace of the film down if they were included, photo gallery, theatrical trailers and a new HORROR’S HALLOWED GROUND with Sean Clarke revisiting some of the classic THE HOWLING locations (some that still exist and look almost identical and others that have since been demolished and transformed into brand new businesses).

Even though endless sequels to THE HOWLING followed, none ever really came close to capturing the mood and tone of the original. They were absolute failures, veering way of course and never finding a way back to the wonderful source material. It’s a shame, because the concept of the Colony and the atmosphere Dante created could have been mined for some kind of successful follow-up.

Then again, he created something so unique and original, to even tread on similar territory would ruin the magic this original created. It’s a movie that reeked of originality during its 1981 release, and still holds together quite well nearly  thirty years later as this Scream! Factory upgrade is well worth adding to your collection.

For an exclusive limited edition poster, purchase THE HOWLING from the SCREAM! Factory website