Home » behind the candelabra interview 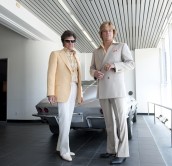 Interview: BEHIND THE CANDELABRA director Steven Soderbergh on the Liberace bio-pic 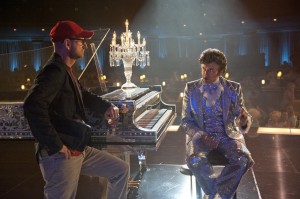 Filmmaker Steven Soderbergh has long been interested in the late pianist Liberace as a potential subject for a film. When Scott Thorson, who was Liberace’s lover for six years, wrote a book (with Alex Thorliefson) about their relationship, Soderbergh felt he had the spine of his story. The result is BEHIND THE CANDELABRA, which premieres Sunday night, May 26, on HBO at 9 PM. Directed by Soderbergh from a screenplay by Richard LaGravenese and produced by Jerry Weintraub, the film stars Michael Douglas (who previously worked with Soderbergh in TRAFFIC) as Liberace and Matt Damon (who has costarred in Soderbergh’s OCEAN’S ELEVEN movies, headlined the director’s THE INFORMANT! and had a cameo in Soderbergh’s CHE) as Thorson.

Following a Q&A session for the Television Critics Association with Weintraub, Douglas and Damon, Soderbergh stops in the lobby for a more informal chat about the man some have deemed the ultimateLas Vegasperformer – whose personal life was as tumultuous as his public life was fabulous.

ASSIGNMENT X: When you read Thorson’s book, did you have any hesitations about any aspects of it or things where you thought, “I think we want to do this differently,” or did it just make you feel like, “Okay, this is great”?

STEVEN SODERBERGH: As soon as I read the book, I thought, “We’ve solved our problem,” which is, what to do, what’s our approach? And so I guess I was just lucky – I didn’t know the book existed, so I was just lucky that a friend of mine did. It [was] not an easy book to find, actually.

AX: Did you have any questions about how big is too big in terms of how you depicted Liberace? He was considered in his day to be the definition of flamboyance.

SODERBERGH: No, I wasn’t worried about that. I was more concerned with the interpersonal stuff, the stuff between him and Scott. It’s a really intimate movie, it’s very emotional, and the two of them really held hands and jumped off the cliff. People are going to be surprised.

AX: Why isn’t this a theatrical release?

SODERBERGH: Because nobody would make it. We went to everybody in town [with Douglas and Damon attached]. We needed five million dollars, U.S. Nobody would do it. They said it was “too gay.” This was after BROKEBACK MOUNTAIN, by the way. I was stunned. It made no sense to any of us. I’m glad we ended up here [at HBO], because they’re great, and they’re really good at what they do, and ultimately I think more people will see it, and that’s all we care about. The great thing about their model is, they want to do things that continue to burnish the brand of HBO, and so this, right out of the gate, accomplishes that. It’s a magnet for attention and so the whole package to them looked like a slam-dunk, whereas the studios were going, “We don’t know how to sell it. We’re scared.”

AX: Was there any thought of getting independent financing at any point?

SODERBERGH: You’ve still got to release it. Who’s going to release it? I made it very clear – I didn’t want to make the movie without a distributor. 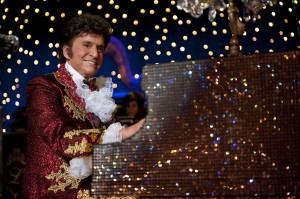 AX: You’ve made a number of independent films. How is making a film for HBO different from making independent cinema – or is it pretty much the same?

SODERBERGH: It was a quick shoot – we had to be very efficient, but there’s not a lot of anxiety over there [at HBO], at least not in the movie department. Things seem pretty calm. The atmosphere is very different than when you’re dealing with a studio or an independent financier, where there tends to be a lot of anxiety and a lot of testing, things like that. They don’t work that way.

SODERBERGH: Yeah, his main Las Vegas house we shot at Zsa Zsa Gabor’s. We dressed it up, but for shooting purposes, it was kind of perfect.

AX: You’ve worked with Matt Damon a number of times. Do you tend to think of him when you’ve got a role for someone his age?

SODERBERGH: I feel lucky that we’ve been able to find projects that at least in two cases that we’ve been able to find, this and Mark Whitacre in THE INFORMANT!, really great roles for a young actor and Matt’s commitment to what was required – as Michael said, he told me during the shoot [of BEHIND THE CANDELABRA], he realized, “Oh, Matt’s the same age now as I was when I did FATAL ATTRACTION. There is no universe I ever would have gotten anywhere near anything like this when I was at that point in my career.” He really admired Matt’s willingness to just do it.

AX: But with gay marriage legal in a number of states now, which wasn’t the case when Michael Douglas was that age. Isn’t there sort of a change in the universe?

SODERBERGH: Possibly, but I think Michael’s point was that, at that stage in his life, in his career, he was I think more protective of his image as an actor than Matt is right now.

AX: You said you first mentioned to Michael Douglas the possibility of him playing Liberace while you were both making TRAFFIC, is it true that he did a good Liberace impersonation?

AX: At that time, what was his reaction to the notion of playing Liberace?

AX: Michael Douglas has been dealing with some serious health issues over the last few years. Did you have to work around that or was he fully recovered by the time you were in production?

SODERBERGH: By the time we were ready to go, he was a hundred percent.

AX: How would you describe the tone of BEHIND THE CANDELABRA?

Related: Michael Douglas talks about playing Liberace in the HBO movie BEHIND THE CANDELABRA