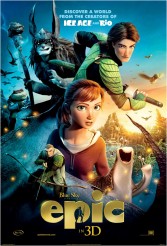 The word “epic” implies a sense of grandeur and a sense of history – either we’re witness to incidents that have their roots in a complex series of events stretching back years, even centuries and/or we’re seeing something enormous that has never happened before. For fantasy epics, think LORD OF THE RINGS or STAR WARS. In EPIC, we see the latest round in an ongoing war between the forces of growth and decay in a forest, personified respectively by the tiny fairylike residents of Moonhaven, whose warriors are called Leafmen, and the goblinesque Boggans. This conflict has been going on forever, but since what happens in EPIC seems like it could happen at pretty much any time the Moonhaven Queen, currently Tara (voiced by Beyonce Knowles), is called upon to create a new sacred bud (something that happens once a century), we don’t get a sense of anything that’s led up to it. Consequently, EPIC doesn’t feel really epic. However, on its own terms, it’s very handsome and reasonably entertaining to watch.

In EPIC, Boggan ruler Mandrake (voiced by Christoph Waltz) sees an opportunity to ruin the Moonhaven ceremony, cause the bud to bloom in darkness and subsequently cause the whole forest to rot. Leafman leader Ronin (voiced by Colin Farrell), who happens to be in love with his queen, is determined not to let the Boggans anywhere nearTara or the ceremony. Suddenly involved in all this is the human M.K. (voiced by Amanda Seyfried), who is in the area much against her will. Her father, Professor Bomba (voiced by Jason Sudeikis), long ago alienated his wife and child with his obsession with finding evidence of tiny people living in the woods; the only reason M.K. is here now is because her mother passed away and Bomba is the surviving parent. M.K. is so exasperated with her father’s continuing fixation that she decides to leave. However, she is shrunk into the world of Leafmen and Boggans and finds herself caught up in the battle. She is thrown together with rebellious young Leafman Nod (Josh Hutcherson).

The tone and attitude are congruent with Disney films of yore – brave heroes, plucky heroine, silly sidekicks, evil villain, high stakes – and it’s all pretty straightforward. There’s a fair amount of by-the-numbers family conflict, with M.K. and her dad needing to find common ground and Nod at once bristling against and longing for structure from leader/father figure Ronin. As for the comedy, there’s nothing memorable, but nothing that’s groan-inducing either.

The voice cast is strong, with Waltz a standout as the baddie. The forest has depth and dimension and the leaf-and-flower clothing of the Moonhaven dwellers is somewhat reminiscent of the creations of Brian Froud, which makes their appearance vaguely familiar in a good way – we’re conditioned to think this is how tiny forest people would dress. The 3D works well enough, though the humanoid characters all look more like creations of traditional animation, which is to say that there’s no attempt to make them photorealistic. This is just as well, as the emotions expressed with their faces and eyes fit better with their surroundings and with the style of the story than they might otherwise.

EPIC is done well. It gets trapped sometimes by its tropes (the film would be just as involving if M.K. and her father and Ronin and Nod all got along from the get-go), but overall, it’s lovely to look at, nicely structured and a pleasant way to pass the time if animated fairy wars are of interest.