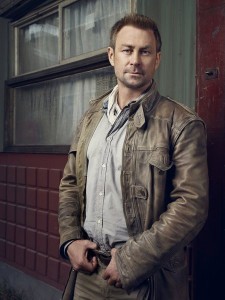 DEFIANCE, which has its first-season finale on Syfy Monday July 8 at 9 PM, is an unusual production. Its premise, which has seven alien races co-existing with humans on an Earth that has been transformed, allows for all sorts of storytelling, but what really sets it apart is that it has been developed in tandem with a Massive Multiplayer Online Game from Trion, also called DEFIANCE, that people have been playing since the show premiered back in April.

Mark Stern, president of original content for Syfy and Universal Cable Productions, shepherded the DEFIANCE project for five years before it finally made it simultaneously onto TV screens as scripted content and onto computer screens as a game. The series takes place in the town of Defiance, previously St. Louis, MO, while the game transpires in a much-changed San Francisco.

At a party thrown by Syfy Channel for the Television Critics Association, in a ballroom decorated to look like the show’s bar/brothel the NeedWant, Stern takes some time to elaborate on what he’s said earlier in the day, including his description of the contractual side of DEFIANCE.

Stern told the Television Critics Association during a Q&A session, “There was no aspect of this deal-making that was normal. As the lawyers will tell you, it was very elaborate, because you had to cover rights that you wouldn’t normally have to cover. Lawyers love that, non-precedented deals, and the agents, even more so. So there were definitely those kinds of deals we had to make where we covered everyone. In fact, Grant [Bowler, as human Jed Nolan] and Stephanie [Leonidas, as Jed’s adopted Irathient daughter Irisa] are in the game [as] avatars. So we needed to make sure we covered all those rights.

“There are two things that I think are really important. I think the first is, philosophically, when we set out with Trion, both companies agreed that we were going to do the best show or game that we could do, period, that you didn’t need to know anything about one to enjoy the other. That was paramount to us. That was kind of bedrock. If you know about both, it helps the experience and it adds to it, but you do not need to know anything about one to enjoy the other, which is one of the nice things about it. Having said that, there’s some great crossover opportunities. There are things that look like they’re spontaneous that the gamers will play. In the game, you’ll help Irisa and Nolan get that gadget. But you’re going to get that gadget, no matter what, because it enters the TV series, regardless.”

At the party, Stern elaborates on this.

ASSIGNMENT X: Because production on the TV series has to work at a particular pace, for instance, in the game there’s a quest to find the cure to the plague on the show, they might or might not be able to say, “And this cure was discovered by Dr. Name-of-Game-Player,” and that’s probably the most they’d have time to do – dub in the name of the player. What happens if none of the game players are efficient enough to cure it? Is that then cured by a non-player character?

MARK STERN: That’s what we were talking about, that kind of engineered spontaneity. Someone will find the cure and that person will be who we need them to be. Because those plot points are very, very particular. So they can engineer that idea as it needs to be. The challenging thing is like, for instance, when we lost our jeep in the pilot and we had to switch out the car, and it wasn’t the car that they had in the game, normally, you can just get another jeep and you don’t have to worry about continuity. Suddenly, it became like a problem, because they didn’t build the same jeep. So it’s that kind of stuff, where you’re like, “Okay, we didn’t think about that.”

AX: Is this multi-platform project evolving the way you expected when you conceived it? Has it been easier, has it been harder, has it been a nightmare of indescribable proportions?

STERN: No, yes, no. It’s definitely not been what we expected, it definitely has not been a nightmare, but it has been a lot harder than I think we expected.

AX: What aspects were harder than you thought they was going to be?

AX: Has any of it been more fun than you were expecting?

STERN: Oh, yeah. Seeing it come to life and all of this nuance, where you’re suddenly creating environments that you’ve never seen before and characters and languages, and seeing them speak those languages – that stuff is just so fun.

AX: Do you have a favorite alien race on DEFIANCE?

STERN: Oh, I can’t take sides. I don’t want to get all biased and bigoted.