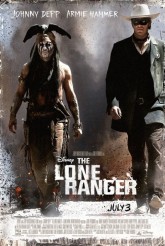 THE LONE RANGER is a strange movie. It’s not that it defies big-budget tent-pole movie conventions. Indeed, it has all sorts of set-pieces that are indebted to previous films, including but not limited to the PIRATES OF THE CARIBBEAN series that so gainfully employed star Johnny Depp, director Gore Verbinski and screenwriters Ted Elliott & Terry Rossio, who share credit here on screenplay and story with Justin Haythe. Rather, it’s that the tone is all over the place. Yes, it’s possible to make a movie that combines slapstick, tragedy and genocide – INGLORIOUS BASTERDS, anyone? – but Quentin Tarantino isn’t at the wheel here, and even he wasn’t trying to make something that was fun for the whole family.

THE LONE RANGER begins with a peculiar framing device, set in 1933 San Francisco, where a little boy wearing a Lone Ranger mask wanders into an exhibit focusing on the Old West. He is surprised when the aged Native American behind the glass in the “Noble Savage” exhibit talks to him. This is Tonto (Johnny Depp), who narrates the story of how he came to accompany the Lone Ranger, aka John Reid (Armie Hammer), and how Reid came to be the Lone Ranger in the first place.

Let’s just stop here for a moment. First of all, there is nothing in this film that requires it to stop at intervals and have anything explained for an outside perspective; there are elements that require and receive exposition within the storyline, but that’s a different matter. Second, if the aged Tonto is real, this is giving us an extremely tragic outcome before we go anywhere. If the boy is simply imagining all this, what the heck is it doing here taking up the amount of time that it does, other than to prove that Depp can play an elderly Native American? If it’s meant to be metaphysical, it basically reduces the notion of spirituality to something that is not just indefinable but incomprehensible and arguably pointless.

This aside, when we meet Reid, it’s 1869. Reid is an idealistic lawyer on a train bound for the railroad-building town of Colby,Texas, where Reid’s brother Dan (James Badge Dale) is a Texas Ranger, married to Reid’s old sweetheart Rebecca (Ruth Wilson) and father of their little boy. Also on the train are a chained Native American – this is Tonto – and the bound-for-execution murderer Butch Cavendish (William Fichtner), who manages to escape. Reid, despite his aversion to violence and gunplay, winds up helping the Rangers track Cavendish and eventually teams up with Tonto, who has his own reasons for what he’s doing.

The assembled cast, which also includes Tom Wilkinson as an ambitious railroad executive, Barry Pepper as a cavalry officer and Helena Bonham Carter as a madam, is very good. Hammer has a mixture of naïveté and determination that serves him well, Dale is committed and seems to be in some other, much more serious film about the Texas Rangers and Wilson is continually interesting to watch.

Depp and director Verbinski, however, seem either oblivious to the fact that they’re replicating stereotypes, or else they think they’re being funny and hip. Instead, this feels like an awfully long way to go to set up using the phrase “not so much” in 1869.

Individual sequences within the film are entertaining, but they are juxtaposed poorly against scenes of massacres and mystical elements that go nowhere. Much of the plot is meant to be fueled by a quest for vengeance, yet nobody (despite some serious losses) seems to take much time to mourn. Despite all the explosions, derailments, runaway trains and so on, the only times these major mechanical incidents are deadly is when it suits plot convenience.

The first time we see Tonto offer grain to the dead bird on his head (and as long as we’re on the subject, especially since we see the child Tonto mourning his dead pet crow, let’s hope no real crows were killed to make that thing), we may legitimately wonder if Tonto is observing a ritual, is crazy, or is just trying to make people think he’s crazy. Many repetitions of this action later, we wish Tonto and the filmmakers would either linger less on the ritual or find another way to raise the question of the character’s sanity – which, by the way, doesn’t seem to have a lot of bearing on the action. We’re being told that what we’re seeing is significant, but it doesn’t affect much of what happens, it’s not intrinsically fascinating and it’s just wearying after awhile.

THE LONE RANGER has its good moments, but it has many more that just don’t come together into a cohesive whole.