A new group of aliens comes to the aid of the 2nd Mass in their fight against their Espheni oppressors. But what are their real intentions? 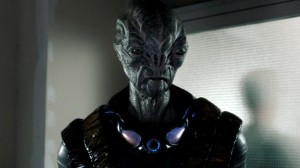 FALLING SKIES took two hours to premiere its third season Sunday night, bifurcating its premiere into two episodes, titled “On Thin Ice” and “Collateral Damage,” respectively.  No doubt the show’s creators thought they’d need two hours to catch us up on all the new off-screen developments they dumped into the lives of the 2nd Mass during the seven months that are supposed to have passed since the end of Season Two.  But for all the gizmos and whats-its that were added to make this once-compelling alien invasion show more exciting, FALLING SKIES still can’t shake the problem that’s plagued it since its first season:  Its army of dull, one-dimensional characters.

As you might remember, FALLING SKIES posits a future where Earth has been invaded by genocidal aliens who look like green, slimy spiders and who steal human children by attaching a big, metallic slug thing to their spine, which turns them into the aliens’ slave labor force. The spidery aliens are referred to as “Skitters,” and these are usually backed up by “Mechs,” big, bipedal robot things with big guns.  These aliens are apparently under the control of a tall, gangly group of aliens referred to as “Fishheads” or “Overlords,” but at the end of last season we learned their race is called the “Espheni.”  What’s new this season is that the human resistance, lead by Tom Mason (Noah Wyle), has found allies not only in a renegade group of Skitters, but also by a fourth group of aliens known as the “Volm,” who ostensibly want to help the humans defeat the Espheni and have gifted them a bunch of their advanced technology to further their rebellion.  The unexpected appearance of one of the Volm, called “Cochise,” (presumably ironically), on horseback during the finale of “On Thin Ice’s” introductory action sequence is meant to serve as the show’s biggest surprise for its viewers.

What follows is a running debate between Tom and his second-in-command Captain Weaver (Will Patton) about whether they can trust these aliens and their all-too-convenient intervention into a battle that otherwise hadn’t involved them.   But Tom is happy to have the aliens’ technology, as it is making a difference in their battle with the Espheni, and for the first time since the series began, humans appear to have a chance to actually repel their alien conquerors.

Also, Tom Mason is now President of what’s left of America, and he presides over the country’s new capital of Charleston, South Carolina.  His significant other, Anne Glass, (Moon Bloodgood) is about to give birth to his first daughter, while his oldest son, Hal (Drew Roy) finds himself paralyzed from the waist down, his middle son, Ben (Connor Jessup) maintains a telepathic connection with the alien leader of the rebel Skitters, and his youngest son, Matt (Maxim Knight) only wants to be a part of the action, and doesn’t really see the point of doing normal kid things, like going to school.

FALLING SKIES has always had a horrific premise, and has been able to mine its mysterious, malevolent CGI aliens and bleak, post-apocalyptic landscape for a good scare or genuine creep-out here and there.  But neither of tonight’s episodes had such a moment, (although the creepy, new Mason baby who’s mysteriously passing through developmental stages at light-speed works okay).  And the decision to shift the series’ focus to a discussion about whether a fourth group of aliens is on the up-and-up sends a signal that the show doesn’t have much more to say about the mystery surrounding its initial group of aliens, which was the most compelling thing about the show’s first two seasons.  This shift in focus is also unfortunate because, unlike the scary Skitters, who are complete CGI creations that move like arachnids and communicate using radio waves, the Volm are actors in standard-issue alien masks, and they speak English in that stale, erudite way that aliens have spoken English in Sci-Fi TV shows for forty years now.  As a plot development, nothing about this “new aliens” storyline serves the show particularly well.

FALLING SKIES also tried to generate more danger for our heroes by adding some “Superior Terrain Droids,” which are a new group of Espheni robot-things that look marginally cooler than the Mechs and shoot more projectile weapons at a time.  But the show’s problem was never an insufficient number of cool-looking aliens or robots that could be parlayed into a line of toys; it was that the characters we’re following through this apocalypse aren’t interesting enough to make us root for the human survivors.  And if “On Thin Ice” and “Collateral Damage” are any indication, it’s not a problem the show has yet solved.  All of these characters are still playing their one-note, none are particularly memorable, and the show’s best actor, Terry O’Quinn, as the misguided idealist Dr. Manchester, is killed off during the first half of the premier.  Without deepening these characters, or bringing in some better ones, all the new creatures in the Universe aren’t going to help FALLING SKIES.