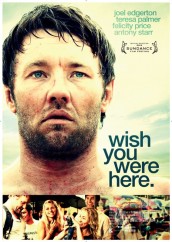 ©2013 Entertainment One
WISH YOU WERE HERE movie poster
Reviews

Movie Review: WISH YOU WERE HERE

A thriller/character study that has surprises at every turn

WISH YOU WERE HERE is one of those tightly-crafted thrillers where scenes that seem innocuous from one angle are later shown to have an entirely different significance when viewed through another lens, even if the characters within that scene don’t understand what’s been set in motion.

At the outset, we see Dave Flannery (Joel Edgerton), alone and looking devastated, wandering in a field. It looks like something terrible has happened, and it has, but the mystery of the film is what happened, how it happened, and why Dave acts as he does afterwards.

The story moves back and forth in time. Dave and his wife Alice (Felicity Price, who co-wrote the screenplay with director Kieran Darcy-Smith) are a happily married Australian couple with two kids, decent jobs, a nice house and a generally good life.Alice’s younger sister Steph (Teresa Palmer) is a bit of a free spirit still trying to find herself, but Dave and Alice are happy for Steph when she hooks up with the charming, attentive Jeremy (Antony Starr). Steph is planning to accompany Jeremy on his business trip toCambodia, and Jeremy invites Dave and Alice along. It seems like everyone is having a good time in a corner of the Southeast Asian country that is a bit off the beaten path. Then there’s a party, some Ecstasy is consumed – and in the morning, no one can find Jeremy. After some fruitless searching, Dave and Alice return to Australia, with a distraught Steph coming home shortly thereafter.

One plot detail is hinted at almost immediately, but rather than drag it out through the whole movie, writers Darcy-Smith and Price deal with it quickly, making it plain that they have much bigger matters in mind. Our sympathies are continually being shifted, as motivations that seem to be one thing turn out to be something else, and we come to understand how something in itself thoroughly innocent could lead to a series of mounting catastrophes.

Edgerton is a superb actor, so that we always believe Dave is in the grip of powerful emotion, even though we may not be sure in the moment exactly what is going on with him or why (part of the filmmakers’ mystery plans, not because Edgerton is ever less than pitch-perfect). Price is powerful as the reasonable, wounded Alice and Palmer does a great job with needy, plaintive Steph.

The filmmakers are very shrewd in how they unspool the action, so that many moments that seem to be simply about character turn out to have major plot implications. Suspense builds quietly but implacably, so that by the end, we get the same kind of satisfaction that is provided by a well-written genre novel. About the only possible criticism in the filmmaking technique is that the pacing is at times too deliberate – there are scenes that could start a little sooner as the pressure intensifies.

One unpleasantness that should be noted: a snake is apparently burned alive on camera in a market sequence. This may be the norm where filming was done, but that makes it no less inhumane and appalling (to say nothing of reminding us that everything else we witness is done for the camera).

Otherwise, WISH YOU WERE HERE is a strong film all around – in performance, characterization and most of all structure. It’s engrossing and a pleasure.