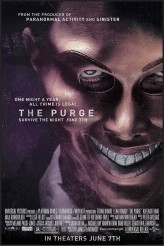 Swift and tense, if also more than a little didactic

Harking back to the independently-made science fiction and horror films of the Sixties and Seventies, THE PURGE takes place in a dystopian near-future (2022) where the government maintains control and order via draconian means. At first, in writer/director James DeMonaco’s vision, all seems well in America. The jobless rate is down to one percent, crime is down, the economy is thriving. The government credits this to “The Purge,” a twelve-hour period once a year during which all emergency services – police, fire, ambulances – are suspended and citizens are free to run amok. Any acts committed during the Purge, including murder, are not viewed as crimes. Theoretically, this lets everyone get their aggression out so they can behave themselves the rest of the time.

The “New Founding Fathers” of America seem to feel the Purge is working wonderfully well – this is its tenth anniversary. How it seems to work in practice is that a lot of those who can afford to hunker down for the night behind elaborate security systems do just that, while others go out, singly or in packs, and hunt down total strangers to shoot, beat, rape, mutilate and kill. There seems to be a trend of the well-off killing the poor and homeless, who can’t afford security systems or in some cases any habitation at all.

James Sandin (Ethan Hawke) is not worried about the Purge, which has in fact made him rich. He sells security systems to his likewise well-off neighbors. He has a lovely wife, Mary (Lena Headey) and the couple have two children: rebellious teenager Zoey (Adaelaide Kane) and serious-minded electronics whiz preteen Charlie (Max Burkholder). James credits the Purge for making life better, though he and Mary don’t participate. Mary seems to have her doubts about the Purge, but keeps them to herself. Charlie shows exactly what he thinks of the whole business by opening the door to a bloody stranger (Edwin Hodge), who is being pursued by a band of upscale college students. The students don’t like having their fun interrupted one bit and make their displeasure known to James.

While THE PURGE can be compared to plenty of other movies about families under siege, DeMonaco is good at winding up suspense and keeping the action going. Because we have information about the Purge before we even meet our main characters, there’s a level of tension from the start that simply rises, with a number of good shocks along the way.

The film tips its hand somewhat, in that we can surmise what will and won’t happen to specific characters, but it still is eerie and ominous in ways that make much of it satisfying as horror. It also has a non-ironic didactic quality that some may find refreshing and others distasteful – the norm these days is to cloak political opinion (particularly in science fiction) in satire, but THE PURGE is pretty straightforward. Filmmaker DeMonaco leaves little doubt as to what he thinks of patriotic chest-thumping and class divisions, not to mention profiteering on shoddy products.

Hawke seems to be building a mini-library of flawed suburban fathers, which is to say he’s branching out into the realm of interesting non-heroes. James isn’t as selfish and myopic as Hawke’s SINISTER character, but he’s still wishy-washy and self-serving, so that rather than being the natural savior of the tale, he’s one of its potentially destabilizing elements. Hawke plays James’ combination of smugness, uneasiness and sincere love for his wife and kids in a way that never tips his hand, so that we believe everything he does without anticipating what that may be.

Headey plays the apprehensive Mary with intelligence, restraint and persuasive emotion. Kane is a convincing adolescent, sulking one moment, contrite the next, and Burkholder is interesting as observant loner Charlie. Hodge has to be enigmatic for much of his screen time but is very good overall and Rhys Wakefield is marvelously hateful as the polite leader of a group very determined to observe the Purge their way.

THE PURGE owes debts here and there to A CLOCKWORK ORANGE, STRAW DOGS and THE STRANGERS, but with its big ideas and ferocious, steady action, it has its own identity. Fans of home invasion thrillers should be particularly happy with the outcome.