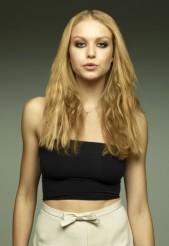 The actress talks playing a young heiress amidst supernatural goings-on 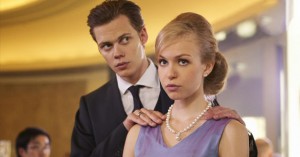 In Netflix’s thirteen-episode series HEMLOCK GROVE, now available in its entirety, the title town is beset by a series of bloody murders. Those in the know about supernatural doings think it could be the work of a werewolf, but with human experiments at a local laboratory and the possibility of vampirism, who can say what’s really going on?

Penelope Mitchell, a young Australian actress, plays one of HEMLOCK GROVE’s central characters. She sits down at Pasadena’s Langham Hotel to talk about her character’s place in the scheme of the series scheming, turmoil and general mayhem.

ASSIGNMENT X: What can you say about your character?

PENELOPE MITCHELL: I play a character named Letha Godfrey, who is a seventeen-year-old girl. She’s the daughter of Norman Godfrey [played by Dougray Scott], who is at the helm of the Godfrey family. [and] the cousin of Roman Godfrey, who is played by Bill Skarsgard. I guess in real life, you could probably compare them to the Carnegie family. So in that respect, they have a lot of social, financial and moral responsibility within the community, and Letha is not only coming to terms with her social standing within Hemlock Grove, but she’s also coming to terms with all the associated, existential angst and insecurities of being a teenaged girl.

AX: You’re Australian, Dougray Scott is Scottish, Bill Skarsgard is from Sweden with time in England, and Famke Janssen, who plays your aunt, is from the Netherlands. Did you have to work on an American accent so you sound like you’re all from the same town?

MITCHELL: Oh, yeah. We had a dialect coach on set, and I have someone back at home who I work with. So very much. It’s kind of funny, because we all kind of step into our characters and then step out.

AX: HEMLOCK GROVE is based on a novel by one of your show runners/exec producers, Brian McGreevy. Did you read the book when you got the part?

MITCHELL: Of course, yes. My story was a little bit peculiar, because basically, being cast took about three days, which was pretty remarkable. But I found so much strength in the pilot when I read it, and having met Brian and [fellow executive producers] Lee [Shipman] and Mark [Verheiden] and Eli [Roth, who directed the first episode] when I auditioned, I kind of had a lot of confidence that the series would be really amazing.

AX: Are you a horror fan, apart from liking HEMLOCK GROVE?

MITCHELL: Yeah, actually [laughs]. It was pretty surreal going into my audition. I knew a lot about Eli. I have two older brothers and I was kind of raised as a genre nerd, and basically, what ensued was an audition where I auditioned for about ten minutes and spent forty-five, fifty minutes, the rest of it, discussing films that we loved and quoting various [lines from] Quentin Tarantino, Sam Raimi. It was a very serendipitous meeting [laughs].

AX: What is Eli Roth like as a director?

MITCHELL: He was great. I guess anyone that knows Eli [knows] he has this remarkable energy about him. This was his first time working in television, so it was kind of cool having someone who was so fresh and learning with us as well. He was so open to collaborate, bounced around – he was never sitting, ever. He was always up there with us, just jelling and jiving, and I think that was conducive to a really great start to the show and also it really helped to forge a strong collaborative essence within the cast and crew.

AX: How was it working in Toronto?

MITCHELL: Obviously, we all moved to Toronto. I’m from Australia, Dougray’s from Scotland, Bill’s from Sweden – we were all kind of lost [laughs]. We all knew that we were going to be there for a long time, so we all made a really concerted effort to be really honest with each other, so we formed really close relationships from the get-go. Because you really need that support. So that really helped. So then we approached everything with a really strong commitment and awareness that it was just a foundation from where we can build, and it’s something that comes across in the material.

AX: And had you worked in North America before this?

MITCHELL: No. This was a huge thing for me.

AX: How is this different from working in the Australian industry?

MITCHELL: For a start, the scale is completely incomparable. I had never fathomed the kind of production I was walking into. So it was very much for me, walking into set, like going back to school again, just dealing with the amounts of the people and the power and the money and various commitments – the various stakes that are involved in that, which are completely overwhelming. So I had to be very present and make sure that I was keeping tabs on myself personally, as well as a performer, and that’s a huge task.

It was a massive trailer, a hundred drivers.

MITCHELL: Yeah. I think that very much the way I was feeling as an actor, as a young woman from the other side of the world – it definitely translates to the way Letha’s feeling. She’s a young girl embarking on her womanhood and dealing with some personal responsibilities and negotiating how she fits in this world and it’s a scary time for her, and that kind of ambivalence was something I definitely used in my performance.

AX: Did you and Dougray Scott, for example, discuss your family relationship before you did the scenes?

MITCHELL: Yeah, we did actually. When I first came to Toronto, Dougray and I caught up. We thought it was really important that he and I got to know each other. I think when you’re playing someone that you’re so intimate with, it’s important to find a rapport and to find just a state of being around each other that’s natural and cohesive. We spent a lot of time talking about our personal experiences and about the characters. Dougray is wonderful to work with on set. He’s so intuitive and will always rehearse and find a place where we’re both comfortable. He’s so open to discussion. I was really lucky to have someone like that to work with on my first job, because I was so lost [laughs].

AX: Are you involved in a lot of the physical running, jumping, kicking, hitting …?

MITCHELL: Yeah, aspects of it. My character is kind of focused on her own trip for a lot of it, but yes, I did my fair share of running and jumping [laughs].

AX: Did you have to do training for that?

MITCHELL: No, I’m naturally pretty agile. I do a lot of exercise and I was an athlete, but it definitely took a lot of stamina, and often we’d kind of pass out and nap between takes on the floor, like babies, really [laughs]. But it’s so much fun, so much fun.

AX: Since the show runner is the author of the book the series is based on, I’m sure he had some strong opinions, but did you get to make any contributions to your character as far as dialogue or attitude?

MITCHELL: The book was in existence, but the characters were limited in the sense that they were created by one person and they were part of an ensemble, so I think the luxury that I had is, obviously, having thirteen episodes and six months to develop this character, Brian even said that he himself could never have imagined some of those complexities that were going on in those inner worlds. Yeah, the writers and producers were always open to collaboration, and I spent a lot of time kind of exploring her world. It’s an amazing luxury as an actor. I couldn’t have asked for more freedom and encouragement.

AX: There’s sort of a Frankenstein component to the story …

MITCHELL: Yeah, both literally and metaphorically. It’s just as much, there are characters that are literally recreated humans, there are also people who are trying to derive a sense of self by appropriating the things around them and trying to struggle to work out where it all fits. I think it’s a really beautiful text in that sense. There are so many double entendres and there’s so much rich symbolism in the writing.

AX: Beyond its entertainment value, do you feel HEMLOCK GROVE has something to say?

MITCHELL: Hugely. Essentially, it’s a modern gothic narrative, and for those who are familiar with the conventions of that genre, one of the central themes is dealing with ideas of polarity, lightness and darkness, one’s own condition, understanding where they fit within society. It also has an exploration of family dynamics, culture dynamics. There’s a lot of heart to it and it’s pretty profound. It really is a drama.

MITCHELL: [laughs] No, I’m the youngest of three kids. My brothers are eight and ten years older than me, and I guess in many ways, I was kind of always a performer from Day One. I was a source of entertainment for my family and my friends. I’ve always been an avid storyteller. Having said that, even though it was an innate thing for me, when I finished high school, I was very insecure about my career and I didn’t think I had what it takes to actually pursue this, so I enrolled in university and finished an undergrad [degree] in literature and journalism, and I was supposed to start my law degree and started last year.

AX: And is there anything you would like to say about HEMLOCK GROVE?

MITCHELL: Embrace it for everything that it is. Enjoy the ride.