Tom seeks out an alliance with the surviving residence movement, led by the actual President of the US, and Anne takes drastic measures to protect her baby. 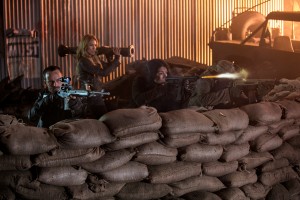 Perhaps the least impressive thing about the alien-invasion drama FALLING SKIES to date is the way that everything in it is pretty much what it seems.   Creating ambiguity or mystery is not exactly a priority for this show.  If one of its characters has the controversial idea that maybe, just maybe, some of these creepy, otherwise-untrustworthy aliens are actually a rebel faction that hates the other aliens and wants to help out the humans – that will ultimately turn out to be the case, and everyone will accept it as a settled fact in pretty short order.  If a new character tantalizes our heroes with the possibility that, against all the odds, America’s original President may have survived the alien onslaught and now expects to run the country again – he really did, and he really does.  If a newborn baby appears to be acting in ways that are borderline supernatural, and it looks like she’s some kind of human-alien hybrid – she is.  The tests will confirm it one episode later.  Our expectations are never tweaked in interesting ways, and, as a result, we’re not exactly on the edge our seats waiting to see how these things play out.  They’ll play out pretty much how the show tells us they’ll play out from the minute they introduce them.

I might be okay with the absence of suspense coming from these little mysteries if only the show still seemed to be interested in its big mystery.  The big mystery, for my money, is why these aliens (the Espheni) decided to invade earth and kill all these people and enslave all these children?   What’s in this for them?  What’s their goal here, and how close are they to completing it?  Should we care about their end game?  Do they even have one?  So far the Espheni just seem like sociopathic space jerks that like screwing with the surviving humans and hanging out on our planet for some reason.  Maybe it’d be nice if some of the characters got curious about this big question again this season?   It seems to be pretty relevant to the predicament they’re in, and could make this show’s villains a lot more interesting for us, as well.

Anyway, three things happen in this week’s episode, “At All Costs,” and none of them actually advance the big mystery.  Not only that, but each of them brings a powerful sense of anti-climax to their respective little mysteries.  I’ll list them in reverse order of how interesting they are:

Number three is interesting because last week Lourdes suggested the possibility that Anne was suffering from post-partum psychosis, and that really needs to be true in order to make sense of her character’s actions this week.  Because let’s review the bizarreness of this move:

A) Anne has no reason to believe her husband will be anything but supportive when she tells him about their baby’s DNA, right?  I mean, sure, some of the Charlestonians might be worried, (assuming they’re ever told), but they’re already living with aliens and kids who have alien spikes still stuck in their backs.  Why make assumptions about how everyone’s going to freak out because of this new alien-related thing?

B) Did she kill the world’s only surviving nuclear physicist?  She hit him square on the forehead with a huge wrench, for God’s sake.  She’s a doctor.  She knows about head trauma.  And it’s not like he had been unsympathetic to her dilemma before that.  How about just asking him to keep her secret for a little longer, instead of possibly causing him intracranial bleeding?

C) Where was she going, exactly?  Her master plan was to raise the baby alone, in the woods, surrounded by murderous, child-enslaving aliens?  Did she bring a whole lot of diapers and a pack and play?

Anyway, the Anne subplot is the only one that truly grabbed me this week, only because I’m interested in the source of her irrationality.  But, based on FALLING SKIES’ less-than-stellar track record so far, I doubt they have many surprises in store for us here, either.