The showrunner talks about artifacts and emotions 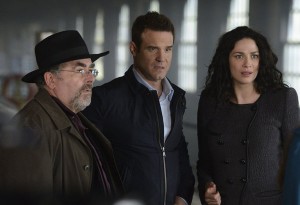 In WAREHOUSE 13, a seemingly dull government facility in the middle of South Dakota contains an infinity of wonders within. This is the Warehouse, where powerful artifacts are stored. When an artifact is discovered to be missing or making mischief in the outside world, Warehouse agents Pete Latimer, played by Eddie McClintock, and Myka Bering, played by Joanne Kelly, are sent to retrieve them.

On screen, the Warehouse is run by Artie Nielsen, played by Saul Rubinek, but behind the scenes, WAREHOUSE 13 is presided over by show runner Jack Kenny (creator of TITUS, writer/executive producer on CAROLINE IN THE CITY), who is also one of its executive producers.

At a press day for NBC/Universal at the Pasadena Langham Hotel, Kenny makes himself comfortable on a couch and answers questions about the Syfy series, now in its fourth season Mondays at 10 PM.

ASSIGNMENT X: You’ve been on WAREHOUSE 13 since before it aired. The series was originally created by Jane Espenson and D. Brent Mote. Was there a change in philosophy in what the show actually was around the time you came on?

JACK KENNY: D. Brent Mote had written a pilot, or had come to [Syfy Network] with an idea, and we’re talking about, was it ten years ago, or eight years ago? He came in a long time before it was actually shot. And they said what they liked about it was the warehouse element. And they had him go off to write that. And then they teamed him up with Ron Moore to do a pass on [draft of] that, and then they teamed him up with – either Rockne O’Bannon came first, or Jane came first and then Rockne. Jane did a big pass on it, and they asked if she wanted to [stay on]. She was busy at the time, couldn’t do it, and then it went to either Rockne’s desk or David Simkin’s, who shot the pilot, did a pass on it and shot the pilot, and then I guess there was a WGA arbitration that said the two creators of this are Jane and D. Brent Mote. So that’s just one of those weird Hollywood stories. That’s the way things happen.

It was a bizarre hand-off, where I was given the reins of this thing that I didn’t create, but very quickly, over the next season, I felt like, even though I’m not credited as a creator on the show, I feel very much like a creator of the show. So if you love it, I get some credit, and if you hate it, blame me, because I’m the one that did it [laughs]. When I got to the show, what I had said to [the Syfy executives] was, “This is your crossover show. This is the show that’s going to bring you people like me, people who like sci-fi but don’t only live for sci-fi. You need a crossover audience, otherwise you’re never going to grow beyond this niche audience. And the niche will stay, it’s just you need to get bigger and this is what does it.” And I said, “And honestly, if we don’t find somebody for Artie to play with, he’s just going to be on the phone while Pete and Myka have the fun, so let’s have a sorcerer’s apprentice, a young girl who he can teach how this works as a father figure.” And so, it wasn’t so much that I had marching orders, but that’s what I thought the series needed to do.

And then myself and a lot of the writers together came up with the mythology. I remember, I was in Toronto during first season. They were shooting something and I was up pretty late and I thought, “You know, I want to write the story of the twelve warehouses.” Because at the time, they just said it was Warehouse 13. And I said, “Well, what if it was the thirteenth iteration? What if there had been twelve warehouses before this one, and they each had a story?”

So I sat with Wikipedia from one-thirty in the morning until about three and went through all the great empires of the world and figured out which warehouse would be where and how it would work and who controlled it and that was fun. That’s when the mythology began to be born, and then we just came up with things as we went along. We introduced Claudia [Allison Scagliotti], that Claudia had a brother, and Mrs. Frederic [CCH Pounder] and her mythology and how does she operate. There was a question of whether or not she was human at the beginning, we named her the Caretaker, because that’s what she does, and the Regents – we came up with all these things. So it’s been an evolving story as each year has gotten to grow.

And I think the advantage of actors playing a part for a long time is, right away, we started writing to the actors’ strengths. We had a meeting with Eddie and Jo and Saul and Allison, and we have since with Aaron [Ashmore, who play Agent Steve Jinks] as well, we said to them, “What do you like? What do you do? Do you ride horses, do you play guitar, do you speak another language, do you swim, do you sing? Tell me all about you, so we can write to that. And then you can do things that you’ll be comfortable doing, and that way will feel even more real.” So we always write to their strengths and we know who they are as people, and that gave it a lot of depth as well.

And then the other thing is, we always try to keep the show emotionally based. The finale of the first season was Artie’s death, which was a punch to the stomach to Pete and Myka. Yes, it’s a big event for the Warehouse, but it’s also a big event personally, and every season finale, I think, has been a big personal and emotional event. That to me is what makes a great cliffhanger, something that isn’t just, “Oh, my God,” but “Oh, my God, how are they going to get through this? What’s going to happen to them? Are they okay? How will they move forward? How will Artie move forward after he killed Lena?”

AX: Was anybody at any point aware of any surface similarities to FRIDAY THE 13TH: THE SERIES, or did people find out about that later

KENNY: I’ve heard people say that. I never saw FRIDAY THE 13TH: THE SERIES. : I think [Syfy executive] Mark Stern had mentioned that there were some episodes of it that he liked and he would reference them occasionally, but there was never any connective tissue. Our biggest fear was more people would say, “It’s like the end of RAIDERS,” where they go into that warehouse and the Holy Grail is in there.

AX: It was early-mid Eighties. It was about a shop full of cursed objects, and the new owners of the shop have to go chase down all the cursed objects.

KENNY: Oh, well, there you go – that’s our show [laughs]. You know, that may have been in Brent’s or Jane’s mind, I don’t know, because they were the ones who were originally massaging the scripts, but I’ve always been of the opinion that there are sixteen great stories out there, and everything is a variation on those stories. Boy gets girl, boy loses girl, boy gets girl, there are just certain tropes with everything. You go, “I get what that story is.” You could also say it’s like X-FILES, where they’re hunting something down, and there’s something new to hunt down every week. But I think everything is derivative – let’s face it, it’s all derivative of Sophocles, right? It’s all derivative of stuff that was done hundreds of years ago. How much of it is like Shakespeare? You watch HOUSE OF CARDS and it’s the Macbeths, you know?

AX: In that case, which Shakespeare play is WAREHOUSE 13 most like?

KENNY: Let’s see. I think WAREHOUSE 13 is most like MIDSUMMER NIGHT’S DREAM, because there’s a lot of kooky, crazy stuff that goes on in the woods. But we actually talk about Shakespearean themes sometimes on the show.

AX: And Joanne Kelly has a Shakespearean background on stage …

KENNY: Yeah, she’s a huge fan of Shakespeare. She was in that wonderful series SLINGS AND ARROWS [a comedy about a theatre company doing Shakespeare]. I love that show. The reason Shakespeare was so successful was that he tapped on universal themes that everybody could relate to. And so that’s why I say that everything is derivative of Shakespeare and before him, because universal themes are what are derivative. Families – I think that’s why this show is a success, because this is about a family, and everybody has a family. Everybody has an annoying uncle or a crazy aunt, or a brother that drives you crazy or a sister that’s uptight or a niece or a nephew where you go, “Auggh, why don’t you grow up?” We all have those, right? Or the nephew is saying, “I’m an adult, start treating me like one.” We all have those dynamics, and that’s why I think people relate to it and like the show, and my job is to keep those dynamics alive every week, to keep those playing.

AX: Have you ever had anything in your life where you thought, “This object is behaving like a cursed artifact, I should put it into the show”?

KENNY: I did have a refrigerator once that we loaded down into the garage because it scared me. [When] I got one of my first plays I did in high school, my high school drama teacher, Cheryl Robinson – her married name is now Cheryl Robinson Prater – gave me this medallion of Saint Genesius, the patron saint of the theatre. I didn’t know there was a patron saint of the theatre. But I wore that probably the next thirty years, that medallion. I don’t have it on today because it pushes the sweater up, but I do still have it and I keep it and that may be an artifact. We all have things that we think, “This is my lucky blank.” That’s an artifact. If you think it’s your lucky blank or your unlucky blank, then that’s an artifact. I used to have a vest that I wore to all my auditions as an actor. I got so tired of this vest, but I wore it everywhere, because I got Motel the Tailor in the Broadway revival of FIDDLER ON THE ROOF, I believed, because I was wearing this herringbone vest, and I think I still have it packed in a closet somewhere, because it’s my lucky vest. I think we all have artifacts – we just call them “my lucky shoes.”