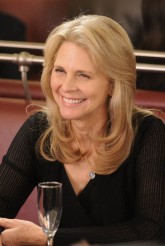 Alice is back and making a lot of body-hopping mischief!

I like ALICE IN WONDERLAND in pretty much any form you can find it, from “The Looking Glass Wars” to Disney’s ALICE IN WONDERLAND to ultra violent video games; I’m always up for things Alice.  So I am pleased that WAREHOUSE 13 returns to the Alice Liddell (Niamh Wilson) storyline from a previous episode. She’s such a nice creepy version of the girl through the looking glass and she is the ultimate personification of damaged goods.

In “Fractures”, the Brotherhood have struck again and once more an artifact is on the loose and causing problems. This time its Lewis Carroll’s mirror, so there’s more of a personal stake to this for Myka (Joanne Kelly) and Pete (Eddie McClintock) since they were involved with Alice the last go around. Plus, Alice has a new trick and is able to body hop, so she’s not as limited as she was the first time around, and who doesn’t love it when bad guys evolve?!

One of the best things in this episode is the fact that one of my favorites Lindsay Wagner is back as Dr. Calder. It’s the same sort of love I have when any character comes back to this series that has been on multiple times before. Dr. Calder is by this point involved in a relationship with Artie (Saul Rubinek), which makes her the number one target for the brotherhood. They want Artie to suffer, and those closest to him are forfeit! Lindsay Wager looks fantastic, she has some age lines, but I would much rather see an actress ageing gracefully instead of going to Joan Rivers route and becoming unrecognizable.

This storyline also finally brings the link between Jinks (Aaron Ashmore) and Claudia (Allison Scagliotti) to light for all involved and now we have to move forward and find a way to get Jinks off the metronome. I would really like for Jinks to have a love interest. Aaron Ashmore is adorable, so how is it that Jinks hasn’t attracted the eye of one single good looking guy when he’s out on a case?! Of course I’m sure there’s plenty of Pete and Jinks fan slash out there, especially with Pete throwing out lines about his abs and his 1,000 crunch routine.

A lot of skeletons are getting aired in this episode, and now that we’ve finally got the Jinks Claudia thing out in the open, everyone else’s attention is shifting to Artie and the thefts at the Warehouse. Different people know bits and pieces, and if they put their heads together they might figure out some of what is going on. Of course, now that Leena (Genelle Williams) has heard Artie’s rant in the vault she knows the most of anyone.

This also brings me to another thought I’ve had about how the artifacts are getting out of the Warehouse. Is Artie doing it himself? Is there an evil alter ego that has developed out of the usage of the astrolabe without his knowledge? It would sure explain a lot that’s going on.