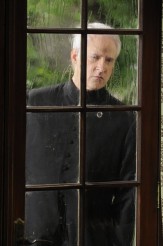 Artifacts are used for good ... but what are the consequences?

Well for this new season of WAREHOUSE 13, I had optimistically left Aaron Ashmore in the list of credits at the top of the reviews hoping that there was going to be a miraculous resurrection of Steve Jinks, and my optimism paid off! I think that’s the biggest revelation of “An Evil Within”  is that Claudia (Allison Scagliotti) with the help of Jane Lattimer (Kate Mulgrew) resurrects Jinks using the metronome that up to this point had been rather nefariously used.

There seems to be a theme for the season already with the Regents coming down on Claudia and Jane for using an artifact and Artie (Saul Rubinek) is being forced to confront the downside of using an artifact with the best of intentions. I have a feeling a lot of the things being established in these first few episodes will collide and cause some fireworks for our favorite Warehouse team. That has always been a rule since day one that no matter what you intend to use an artifact for; there are always consequences of using it.

Now that time rewound at the end of the first episode, Brent Spiner returns as Brother Adrian, who of course is working for the Vatican and is hot on the trail of Magellan’s Astrolabe. The same Astrolabe that Artie used to turn back time, regardless of the warning that usage of the item would unleash an evil into the world. Now, I have to pause here, and say that no matter what the intent of the series in having Spiner’s voice over multiple times in an episode saying the same thing about “An evil that will live with you the rest of your days”, only makes it somewhat comedic. There’s something about the way the lines sound, that makes them more campy and less ominous…so hopefully there won’t be quite as much of that as we move forward.

I really like the artifact in this episode. I won’t say what it is in this review, but simply say that it has a connection to the “old ones”. Some interesting special effects CGI critters in this episode as a result of this artifact, and a moment with a monster running in terror that is one of the best laughs so far this season.

One thing I was having issues with watching this episode was the women’s hair. I have no idea if their hair person was having an off day, or if they had a replacement hair person, but all of the women who normally have nicely done hair, look odd and unfinished. Myka’s (Joanne Kelly) and Jane’s hair both look unruly and full of random sections of hair sticking out all over, and Claudia has a hair don’t moment sneaking into the Regent’s office. This is just a nit picky thing but it makes me crazy when a show suddenly has bad hair, or makeup, or costumes; when it’s been spot on this whole time.

So YAY for Jinks, and the return of a gay character to the series, YAY for the Old Ones, and BOO for bad hair days for the ladies. I think that pretty much sums up this episode! Oh yeah, and bring back H.G. (Jaime Murray) now! I love that character, and she comes up with some really nifty Steampunk devices!