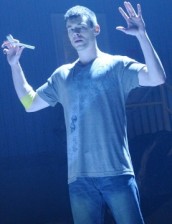 Devil's Lake, North Dakota ends up with an explosion of artifacts!

In the third episode of this new season of WAREHOUSE 13, the specter of Walter Sykes (Anthony Michael Hall) rears his ugly head again. Seems in “Personal Effects”, the team has to contend with multiple breakouts of artifacts that Sykes had acquired in his grab for power and revenge.

Of course, all of the artifacts turn up in one town, Devil’s Lake, North Dakota. Now the funny thing about that to me is the size that WAREHOUSE 13 makes Devil’s Lake out to be. I went to school in Grand Forks, ND and my best friend was from Devil’s Lake, so I’ve been there. I can tell you that the show added a whole heck of a lot to a town that basically has a main street and some nice local businesses, but doesn’t have a music conservatory and bird sanctuary. Stretching it just a wee bit there kids.

It’s nice that team Claudia (Allison Scagliotti) and Jinks (Aaron Ashmore) can be together again back in the field. Their exchanges with the girl in the lingerie shop are hysterical, and the banter between them is so quickly reestablished that you forget he was ever gone. Of course, the dark side of their new arrangement takes no time at all to manifest, and now every wound Jinks gets, Claudia feels. He feels nothing and she has no marks, but she feels whatever trauma is done to his body. That’s gonna suck in the future…plus what about pleasurable contact? Will she feel that too? Awkward.

Leena (Genelle Williams) manages to get out in the field in this episode as well. I like to see her outside of the Warehouse and the B&B, and seeing her using her unique talents in the field almost smacks of MONK. She has a clearly developed sense that she uses with the artifacts, even if it’s something as simple as saying that an iron can’t lay flat and this artifact can’t be near another for fear of catastrophic events unfolding. Plus she is now the only one who suspects that Artie (Saul Rubinek) is hiding something very large from the whole team.

Myka (Joanne Kelly) and Pete (Eddie McClintock) get put on the trail of the big artifact for the episode, and things take a surprising turn for the emotional when the mystery of how and why is finally unraveled. As always there are some nice moments between the two as they pursue their quarry.

Dee Wallace makes a guest appearance as the head of a hospital, and it’s always nice to see her pop up here and there in film and television. I feel bad though, because E.T.’s mom took a pounding from a teenager with the ability to control the weather.