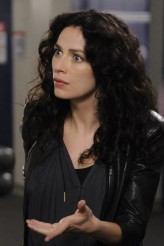 A more comedic episode that works really well plus Myka and Pete hook up?

So last review I was ragging on WAREHOUSE 13 because I felt the series is becoming too campy, and isn’t striking the right balance between the comedic elements of the show and the serious elements.

In “No Pain, No Gain”, however, I have to say that the episode was well done, and all of the more comedic moments really work well and help to create a fully satisfying episode. The main artifact involved portion of this episode finds Myka (Joanne Kelly) and Pete (Eddie McClintock) trying to track down some kind of item that is allowing a professional hockey player to mend wound, play faster, and be stronger. Of course, what ends up happening in the episode is completely unexpected in a few places and ends with Myka pregnant with Pete’s child. What? Yes it’s true!

Basically the artifact is a wish fulfillment device and Pete makes the mistake of wanting someone to share his life with and have kids while he is thinking about Myka. So does this mean Pete is in love with Myka? I don’t mean does he love her, that much is obvious from episodes in the past, but is he IN love with her? Does that mean that we’re now going to have some level of romantic tension on the show, and this becomes something like MOONLIGHTING with supernaturally powered objects? Time will tell.

Myka actually ends up with a love interest in this episode as well, Mike Madden (Mike Dopud) the hockey player who is suddenly in his “A” game. There’s a kiss, and some interesting looks between the two, and we’ll have to see if this comes back around like some of the other love interests for characters on this show in past seasons. Not only does Mike serve as something to make Pete jealous, but if you are a GRIMM fan you will recognize him from the first two parter of this new season in which he is a sabertoothed hit man.

More on Artie (Saul Rubinek) and his war with Brother Adrian (Brent Spiner) as he discovers more and more artifacts are missing. There’s a cute bit with him and Jinks (Aaron Ashmore) using Hatfield and McCoy rifles to find the stolen items, but unfortunately the scene is a bit ruined by clumsily written car product placement that seems like an ad in the middle of the hunt.

So now Artie knows about Jinks, Myka knows about Jinks, and it’s just a matter of time before someone decides they HAVE to tell Claudia (Allison Scagliotti)! Oh yes, and this episode we see the birth of an artifact which is uncommonly cool! Up next on WAREHOUSE the return of Alice, so don’t miss it kids!