Things happen, but it’s hard to feel the impact 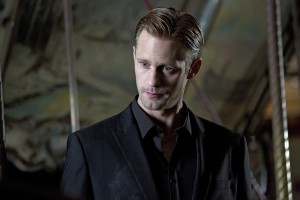 TRUE BLOOD will probably never get less than a B grade here, because it’s just too well-acted and too well-made, and the individual characters are (mostly, still) too well-delineated. That said, it’s a sad moment when a favorite show hits a patch where one’s primary sentiment is, “Oh, just hurry up and get on with it.”

This turns out to be the case with “At Last.” Ben (Rob Kazinsky) turns out to be a fairy/vampire hybrid – we find this out when he gives an injured Jason (Ryan Kwanten) some of his blood, though Jason only recognizes this in a homo-erotic dream (which lacks anything like “They say the water in Arkansas is hard” for those who remember the last one of these). Ben also turns out to be – no surprise – Warlow. He largely drains Niall (Rutger Hauer), then gives Niall some of his blood, then shoves Niall into a portal. Sookie (Anna Paquin), who has figured out Ben is Warlow, apparently accepts his seduction – then confronts him with a ball of glowing fairy magic.

Bill (Stephen Moyer) has Jessica (Deborah Ann Woll) entice Andy’s (Chris Bauer) four half-fairy daughters – who have now turned into teens – to come to the mansion. Bill thinks if his captive scientist Dr. Takahashi (Keone Young) can synthesize fairy blood, vampires will be able to walk in the sunlight. Bill is able to get samples of their blood without trouble, but Takahashi can’t get the blood to stabilize long enough to replicate it. When the fairy girls want to leave, Jessica tries to stop them, then loses control and drains them, to her horror. Bill isn’t too pleased either.

Eric (Alexander Skarsgard) makes Tara (Rutina Wesley) tell him where she took Willa Burrell (Amelia Rose Blaire), the governor’s daughter. Eric finds Willa right whereTaraleft her, as Willa has quite a crush on Eric. Eric, feeling Willa is worthy, turns her, then sends her home to plead with her father, Governor Burrell (Arliss Howard), for vampire rights. Burrell is torn between love for his daughter and hatred of vampires. Unfortunately, he has a hand wound and newbie vamp Willa is tantalized by the blood; the guards are all over her. Sarah Newlin (Anna Camp) turns out to be the Governor’s new girlfriend and she has news for him – want to bet she’s pregnant, so Willa will no longer be his only child?

Sam (Sam Trammell) turns into a horse so that little Emma (Chloe Noelle) and the injured Nicole (Jurnee Smollett-Bell) can escape on his back. In a motel room, after Emma has gone to sleep, Sam and Nicole start to make love.

Alcide (Joe Manganiello) takes his father Jackson (Robert Patrick) to track Sam and Emma, commanding the rest of the pack not to follow him.

This last bit offers the best line of the episode – when Rikki (Kelly Overton) starts to question Alcide’s orders, he roars, “Who’s your packmaster?” It has a good ring to it.

All of the actors do heartfelt work, with particular kudos-worthy work from Woll and Bauer, but the script seems to be in such a hurry to cram everything in that almost nothing has time to resonate. The fever pitch reaches a point of, “So what you’re saying is we shouldn’t care about anybody” with Emma first reminding us that her mom, Sam’s lover Luna, died three days earlier, and then Sam – not a callous soul when it comes to these things – getting together with new acquaintance Nicole. You’d think things like grief, exhaustion and Luna’s little girl in the next room, to say nothing of wanting the audience to think that character loss has some impact, would cause Sam to wait a little while longer. Given that Nicole just saw her best friends die in front of her less than twenty-four hours ago, one might suppose she might want some time to compose herself as well. On the other hand, the next episode is entitled “F*** the Pain Away” (seriously), so maybe that’s what’s supposed to be happening here.

We’d appreciate Eric turning Willa more if that hadn’t seemed the obvious move from the beginning. Given how solemnly Eric takes the charge of making another vampire, we can buy his hesitation, and getting Willa back to her father as quickly as possible makes strategic sense, but it gives us less time to care about her, either as an individual or as a partner for Eric.

The whole Emma custody business could have resonance and poignancy and other positive attributes if it were given time to breathe, but right now, it seems relegated to maguffin status so that the wolf pack and Sam can fight. Since it has been repeatedly established that the wolves can beat up Sam and Sam can outwit the wolves, we feel like we’re treading water here.

There is the threat of all-out vampire/human war, but it’s being handled in such a piecemeal way that we can’t get very excited for or against any specific developments here.

All of this makes “At Last” feel much more like it ought to be called “And …”.