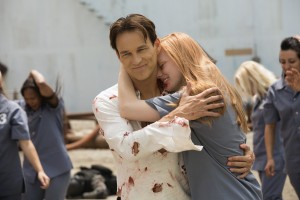 Why did TRUE BLOOD have to kill off Terry Bellefleur (Todd Lowe)? Probably because it was felt someone of long standing had to go, and if they killed Sookie (Anna Paquin), Bill (Stephen Moyer), Eric (Alexander Skarsgard) or even comparative newcomer Alcide (Joe Manganiello), there might be viewers descending on HBO with pitchforks and torches. Even so, it’s a sad loss – which is exactly the intended effect.

Terry – who actually died two episodes back, having asked an old Marine comrade to kill him when he won’t expect it, and then really not expecting it because he’s been glamoured into forgetting everything about the Marines – gets a first-rate funeral in “Life Matters,” which is chock-full of flashbacks to various characters remembering their interactions with the troubled but kindly husband, father, former soldier and (until his demise) Merlotte’s cook.

The funeral actually occupies much of the episode, which would be peculiar (especially for this show), if not for the action that shares its screen time. Eric, now so full of the blood of vampire/fairy Warlow (Rob Kazinsky) that he currently has more of it than the wounded Warlow does himself, goes out in the daylight to save offspring Pam (Kristen Bauer von Staten) and Willa (Amelia Rose Blaire) from the vampire prison facility. When Bill threatens both Sookie and Warlow if Warlow won’t come with him, Sookie zaps Bill away. Bill heads for the prison by himself to rescue his progeny Jessica (Deborah Ann Woll) and the rest of the captive vamps, at least the ones who aren’t dying from drinking tainted Tru Blood.

Bill and Eric separately (they don’t cross paths directly, which is probably just as well right now) do a lot of liberating of vamps and revenge killing of humans, with Eric first castrating Dr. Overlark (John Fleck) and Bill later stomping in the man’s head. Eric rescues Jason (Ryan Kwanten), who is practically drained to death, by donating some of his blood (after it’s clear Jason is no longer crazily anti-vamp, as he was at their last meeting). Jess, Willa, Pam, Tara (Rutina Wesley) and Jess’s new friend James (Luke Grimes) are all in the circular room Bill has seen in his apocalyptic visions. Worse, Sarah Newlin (Anna Camp) has escaped the carnage and has made it to the roof, where she’s manually opening the retractable top of the circular room. What Bill didn’t foresee is that Bill goes into the circular room and lets the other vampires feed on him, giving them his sun-surviving qualities. Eric enters and prevents Steve Newlin (Michael McMillian) from feeding off Bill, pointing out that every time Eric has lost a loved one, Steve has been there. Eric holds Steve in the sunlight. Steve declares, “I love you, Jason Stackhouse!” – which Jason, in another room, hears – and explodes. Eric also lets Pam kill her lustful psychiatrist (Pruitt Taylor Vince).

The vampires – plus Eric’s human admirer Ginger (Tara Buck) – emerge to outside the building, rejoicing in their freedom. Bill, greatly weakened from blood loss, is still in the room and sees Lilith’s three handmaidens, who tell him it’s time to leave this world. Bill insists he’s not going anywhere. Jessica feels his call and goes to him, James in tow. James realizes that since Bill’s blood saved them, perhaps their blood can save Bill, which it indeed does. Pam wants Eric to stay, but he flies off.

Jason confronts ex-lover Sarah on the roof. He almost kills her for being pure evil, but decides he doesn’t want to kill even her and lets her flee. Doubtless Sarah will give Jason and others good reason to regret this decision. Here and elsewhere, vampires take great pleasure in destroying the bottles of tainted Tru Blood. And Sookie, who has promised to marry Warlow, sits and contemplates her decision.

Episode writer Brian Buckner and director Romeo Tirone are to be commended for juggling tones that go from sorrow to adrenaline to pure gross-out (the castration scene really goes for it) to moments of joy. Terry’s funeral achieves an ephemeral tone of nostalgia, warmth and grief, which is a lot harder to accomplish on screen than at a real ceremony. The intercutting of this with the full-tilt-boogie goings-on at the prison camp is handled so that neither tone overwhelms the other – it’s a very well-calibrated balance.

It’s a shame to loss Terry and actor Lowe, but his exit is given appropriate impact. Carrie Preston as the widowed Arlene is extremely affecting. For that matter, McMillian’s mischievous, sometimes monstrous but always entertaining Steve Newlin will also be missed. Meanwhile, it’s great to see how the plot strands weave together so that everyone’s fates and alliances are noted, even as havoc rains down everywhere.

What will Sookie do? What was up with that nasty apparition of Warlow in her home? Will Bill be back to his normal, pre-Lilith self? Will Eric ever come back out of the sky? Stay tuned for next week’s season finale.