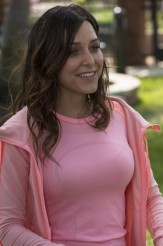 An episode that works more seamlessly than might be expected

On the face of it, it seems like it could be risky to put the character Wilfred (Jason Gann), a dog that his human friend Ryan (Elijah Wood) and the audience see as a man in a dog suit, in scenes with real canines. The episode “Sincerity” proves otherwise, as having real dogs behaving like themselves just underscores the projection and paranoia of our boy in gray.

When Ryan takes Wilf to a dog park, they have a bonding moment over mutual disgust at the people who dress up their companion animals in silly clothing and pretend to speak for them. Then Ryan realizes one of these “crazy” people is his old high school crush Kim (Jenny Mollen), who tells him she now teaches a dog obedience class. Wilf thinks it would be fun to go back to school – he claims he was one of the “cool kids” – and then acts up so much that his owner Jenna (Fiona Gubelmann) believes he needs an obedience class.

So Ryan gets to be around Kim and Wilf gets to go back to school – except of course as Wilf tries to be cool (by insulting the other dogs), he looks very uncool. Ryan makes a hit with Kim by falsely claiming to be a big dog person. Wilf winds up having a horrible time, claiming he is being bullied and mocked on Facebook by his classmates. Wilfred then tries to sabotage his school experience, and when Ryan makes him go back, the dog attempts to kill the other dogs by opening the gate that leads into oncoming traffic. However, this is obedience school, and one firm “Stay” command from Kim keeps the dogs in the yard.

Finally, Wilf admits to himself that he’s not one of the cool kids and, with Wilf’s prompting, Ryan realizes that a relationship in which he has to pretend being something he’s not – in this instance, a dog lover – isn’t right for him. Both Wilf and Ryan wind up alone (with each other), but authentic (at least, as authentic as they ever get).

The unstated irony, of course, is that Ryan’s life in fact revolves around Wilfred, so he’s as devoted to one dog as a person can be, though not in ways that Kim would recognize.

There are some moments of conventional, truly funny humor here – when Kim utters “Stay” and all of her students instantly obey, it’s an unexpected, effective bit of regular comedy. Mollen is appealing (and, in a bit of trivia that may be relevant to a show about a guy in a dog suit, she played Nina the werewolf on the final season of ANGEL).

Since Wilf is as delusional with other dogs (barring his own clone) as he is with everyone and everything else, it seems like the show may have missed an opportunity to let one of its leads have a different perspective within a peer group. Then again, actual canines have an undeniable reality and inherent coolness that makes Wilf’s efforts to fit in seem all the more futile and strangely understandable. Who wouldn’t want to be part of a group so effortlessly natural?