The prolific helmer talks about the FX comedy, including that scene from the doggy dancing episode 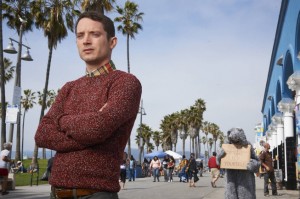 WILFRED, now in its third season on FX Thursdays at 10 PM, is the offbeat, often surreal comedy about Ryan (Elijah Wood) who is the only person who sees his neighbor’s dog Wilfred (Jason Gann) as an Australian fellow in a dog suit. Gann originally created the series with Adam Zwar as a short in their native Australia, where then was made into a television series. David Zuckerman adapted WILFRED forU.S. television.

Randall Einhorn has directed the majority of WILFRED’s episodes and after a gathering of FX series directors at the Television Critics Association press tour, he takes some time to talk about his work on the iconoclastic comedy.

ASSIGNMENT X: You’ve been on WILFRED since the beginning. In some ways, it’s a traditional sitcom, but in some ways, it’s very different to everything. Do you feel like your job as director is to help it seem completely different or to shape the outrageous material into something that people can get their brains around?

AX: When you read WILFRED for the first time, did you find it analogous to anything you’d seen or been part of?

EINHORN: No. That’s what drew me to it. I looked at that and I thought, “This is the strangest thing I’ve ever read. Oh, my God, I can make a mess with this.” And that’s what I found so exciting about it. But it’s like nothing – other than HARVEY.

AX: What was your directing background before WILFRED?

EINHORN: I was a d.p. on THE OFFICE. I d.p.’ed a hundred and some odd episodes of THE OFFICE and there is where I started my narrative directing career. I started telling jokes on THE OFFICE, so they asked me if I would direct some episodes, and I ended up directing. I think more than anyone has ever directed. So I did a bunch of THE OFFICE, PARKS AND RECREATION, MODERN FAMILY, IT’S ALWAYS SUNNY IN PHILADELPHIA, NURSE JACKIE this last year.

AX: What’s it like when the creator of your show is also one of your leads?

EINHORN: That’s fantastic. Jason Gann created that character, which was adapted quite a bit here. It comes with a fully-formed opinion and a fully-formed character that nobody else can do. That’s great. Jason knows clearly what he thinks and what he wants and what Wilfred would want. But he’s also very, very trusting, and that’s quite unique.

AX: There are some moments so outrageous that it’s hard to believe they’ve happened, like in the episode with the doggy dancing, where Wilfred winds up getting his male bodily fluids on Ryan’s face …

EINHORN: Oh, gosh. We laughed so hard that day. I had my hand on Jason’s stomach as he’s laying down, acting for Elijah, and I had my hand with a syringe full of egg yolk or whatever it was, mixed with mayonnaise, and I’m just giving little squirts at Elijah [laughs]. We just laughed so hard and Elijah was staying in character. Me and Jason are just giggling messes, just giggling our faces off as we’re squirting fake dog [male bodily fluids] on [Wood’s] face. Elijah stayed in character the whole time. I don’t think there was one take where we didn’t break up – except for Elijah.

AX: You have new show runners this season. Has that changed any of your dynamics?

EINHORN: Yeah, it certainly has. I mean, having different people in charge of the final script of each episode certainly changes my dynamic. It’s a different dynamic on set, for sure. I think this year certainly is lighter, more levity.

AX: Are you an L.A. native or been living here a long time?

EINHORN: I’ve been living in L.A. for eleven years. Before that I was in Australia.

AX: Did you know Jason Gann when you were in Australia?

EINHORN: [laughs] I did not know Jason Gann in Australia. I didn’t know about the project until FX brought me in. I had done a couple of seasons of IT’S ALWAYS SUNNY with them and they asked me to read the pilot.

AX: Does having lived in L.A. so long help you with location shoots, in terms of knowing where all the landmarks are?

EINHORN: It’s funny – everything becomes a location after you’re here for awhile. “We filmed there, we filmed there – oh, we scouted that, didn’t shoot there.” I was in New York last week, just driving around all the places I shot NURSE JACKIE. “Oh, look at that, we shot there, we shot there – we didn’t get that place, that place fell through.” Everything becomes a location when you’ve done it awhile.

AX: You have an exterior night shoot this season. Does this mean the budget has gotten a little bigger?

EINHORN: Not really. I think we’re just getting smarter with it. We are getting a little bit more budget, but I don’t think that’s the difference. I think when big set-pieces like that are written, we just do a lot of planning. We shot that the very last week of fifty-seven days of production, so there was a lot of planning that went into that so we could do it quickly and efficiently.

AX: Gwyneth Horder-Payton, who has directed episodes of FX’s new drama THE BRIDGE, was talking about how sometimes having a low budget – in her case, having to shoot an intense fight scene inside a small apartment – can sometimes lead to innovation. Does the relatively low budget of WILFRED help you in any way?

EINHORN: You know, I think Einstein said, “In the midst of difficulty lies opportunity.” So you show up and the room is tiny and she found a way of making it look brilliant. I walked over to say to her that I felt that. I felt that tiny room, I felt like there was a fight in a small room, and it added to the scene. If you would have been pulling walls out of that, I don’t think it would have been anywhere near as interesting or dynamic, so I kind of embrace it and roll with it and make it work.

EINHORN: Yes. Working on cable, there’s a lot more freedom to push things a lot further, which, let’s face it, my life is nothing like – or, I don’t think life is much like what’s on network television right now. Not that life is anything like WILFRED, either [laughs].

AX: Have you been to Comic-Con with the WILFRED people?

EINHORN: I was unable to go to Comic-Con this year. I was in New York. [I’ve attended] the last two years.

AX: How was the Comic-Con experience for you?

EINHORN: Season 2 was enormous. The doggy dancing episode was a huge crowd-pleaser.

AX: Do you get to be part of the rock star experience?

EINHORN: Yes. Absolutely surreal. It’s crazy. Walking through the crowds and standing at the booth for awhile and signing autographs and people are happy to meet you – it’s really nice. It’s great.

AX: Was this ever anything that occurred to you that might happen to you as part of your job?

EINHORN: It was honestly nothing I ever sought out, but once it happened, it was like, “Wow, people like it. Hmm, cool.”

AX: Is there a seasonal arc to WILFRED’s third season?

EINHORN: Oh, yeah. The end of the season, which I think is a unique, very interesting thing about WILFRED is, it often leaves you with more questions than answers.

EINHORN: I’m directing a pilot for FX starring Tracy Morgan called DEATH PACT. “Pact” like an agreement – in this case, an enforced agreement.

AX: Do you know whether there will be a WILFRED Season 4 yet?

EINHORN: No, we don’t know about Season 4. I’m very curious and hopeful.