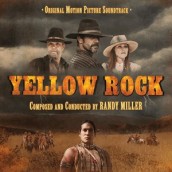 Randy Miller scores this western with a vengeance

As every western from ULANZA’S GOLD to JEREMIAH JOHNSON has proven, two big no-no’s for the white man is to go crazy for precious minerals, let alone violate a sacred Indian burial ground. Both are done in spades for the indie oater YELLOW ROCK, as a well-intentioned search party spins out of control with greed to the accompaniment of a vengeful, straight-arrow score by Randy Miller.

An underrated, orchestral composer for such films as HELLRAISER III, WITHOUT LIMITS and TV movie spins on DARKMAN and FIRESTARTER,  Miller has always put impressive thematic muscle into his work. His talent is especially potent while traversing YELLOW ROCK‘s badlands. With a stormy main theme that gallops in with no-nonsense determination, Miller unleashes the western score mainstays of strings, guitar, horns, imposing drums and rattlesnake percussion in a way that isn’t about to wink at itself. And with Native Americans thankfully the good guys, Miller plays up the warriors’ bravery with bird-whistle flutes and indigenous rhythms that shows the tribe’s clear-cut heroism and nobility. However, while Miller captures their inherent spiritual peace, his music is just as ready to shout with a war cry.

While Intrada might soon be putting out Hans Zimmer’s THE LONE RANGER, it’s nice to see that the label is giving a shot to a smaller score like YELLOW ROCK. Sure this might not be for a Bruckheimer epic, but damn if Randy Miller isn’t gunning to get every bit of production value for a soundtrack that’s impressively hell-bent for the bloodily melodic glitter of gold.