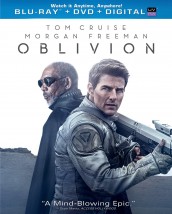 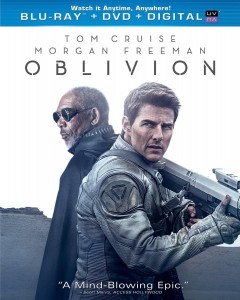 OBLIVION – Despite all the lunacy surrounding Tom Cruise off-camera activities involving religion, he’s a great actor and especially his action films are usually right on point. OBLIVION is a pretty awesome movie. It has a lot going for it including loads of originality that hasn’t been seen in the science fiction genre in a long time. Cruise stars as Jack and along with Victoria (Andrea Riseborough) they perform maintenance and observation over automated machines that convert the Earth’s oceans into drinkable water. The reason they are doing this is to provide the remaining human race living on a moon of Jupiter with substance. But Jack yearns for something more. He finds trinkets and treasures of the old world and has memories of living before aliens invaded, destroyed our moon (causing earthquakes, tornados and more that ravaged the Earth) and launched an all-out assault on the world. These memories drive him to learn about what’s really going on and who he really is.

Filled with amazing imagery and special effects, OBLIVION is like watching a work of art on a computer come to life with big name actors like Cruise, Morgan Freeman, Olga Kurylenko and GAME OF THRONES’ Nikolaj Coster-Waldau performing for our visual enjoyment. Again, it is the originality of the science fiction epic and the scenery that makes it here not necessarily any great performances, although Cruise is quite good. This has to be seen in high definition. Anything less is cheating you of seeing how wonderful the special effects are – and nonstop – and just will bring down the enjoyment. But on Blu-ray you get the full effect and I highly recommend if you needed a reason to upgrade this should be one of many reasons. 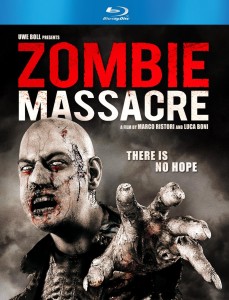 ZOMBIE MASSACRE – Ah Uwe Boll, he certainly knows how to get behind the right projects. Famous for writing and directing a hoard of bad video game movies, lately Boll has been throwing his name into extremely low budget zombie films. This is the latest from Marco Ristori and Luca Boni with Boll attached as a producer. Not a lot of good things to say about this other than if you love zombie movies and have extensively watched everything else, this might be worth checking out. Basically the whole movie takes place in some industrial sector of what they claim to be Romania where a zombie outbreak has broke out and the military sends in a group of ragtag soldiers of fortune – including a hot red headed ninja (who read that right) – to plant a nuke inside a nuclear power plant in order to make the country go boom and take out the entire infected city. Why they wouldn’t just use a plane is not even considered and would be too logical apparently. Anyway, you know the drill: many of them die along the way, the military double-crosses them, some really bad CGI and hilariously bad zombie make up. Again, only bother if you have already exhausted what’s already out there. 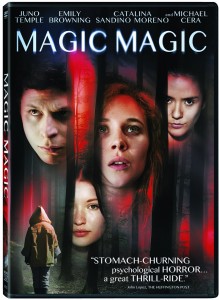 MAGIC MAGIC – This is a clusterf**k of a movie starring Juno Temple, Michael Cera and Emily Browning about a foreigner that travels to Chile to visit her cousin only to be stuck on a remote island with three of her cousin’s friends that turn out to be less than accommodating. While the actors here are usually competent, they are terrible here from top to bottom. Literially nothing happens in the movie other than Alicia (Temple) going batsh** crazy over and over again because she thinks something is happening when in reality she is sleepwalking, acting and freaking out the entire time. It’s boring, not at all scary and you keep waiting for something, anything, to happen and it never does. Temple gets naked, which is always cool and she’s so good at it, but that’s about the only thing worth watching. 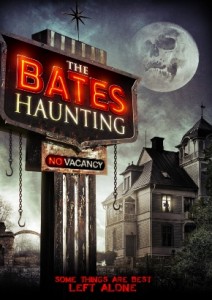 THE BATES HAUNTING – An extreme no-budget horror flick about a young woman that sees her best friend die in a fire at a horror hayride. When her father gets her a job at the hayride in order to provide some closure, things once again take a turn for the worst and co-workers start falling victim to some well placed accidents. Terrible acting, a mediocre storyline and some weird cameos of the late Ryan Dunn and Bam Magera don’t help matters. The fact that it is an independent film and is being offered exclusively on Video on-Demand (VOD) is a cool feature and goes to show just how technology and over-the-top media has changed entertainment. However, I just wish it was a better movie. The good news is that maybe we will have better content delivered via this method in the future and give horror fans something more worth their time. That said, if it wasn’t on VOD, you’d probably not be able to see the film at all, so I guess that’s a good thing. 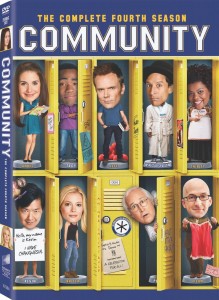 COMMUNITY: THE COMPLETE FOURTH SEASON – As great as COMMUNITY has been over the past four years, it has been a less than stellar success ratings wise. But many people don’t care about that and just enjoy the series for what it is. COMMUNITY is a hilarious take on people that go to community college from the older gents that try to re-create their career, to the struggling artist, to the perpetual student and many more. The fourth season includes 13 episodes with a host of special guests including Jason Alexander, James Brolin, Tricia Helfer and more. The season also includes the hilarious take on PARANORMAL ACTIVITY, a solution to the Shirley’s Sandwiches plotline and of course more of the one-shot episodes that have nothing to do with really nothing – which of course is why this show has garnered such popularity.