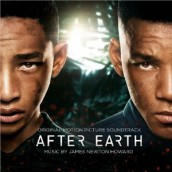 James Newton Howard gets a better musical vehicle from M. Night than expected

They may have started off with the THE SIXTH SENSE. But with one godawful M. Night Shyamalan movie after the next, the one thing you can be assured of is a very good score by his musical enabler James Newton Howard. His scoring always manages to make the absurdity that the director’s fallen into just a bit less goofy, whether it’s using solo violins to embody killer planets for THE HAPPENING or LADY IN THE WATER‘s rapturously symphonic fairy tale. While there’s no surprise that Howard has risen to the challenge with AFTER EARTH, it’s no small help to his soundtrack’s effectiveness that this is actually the first fairly decent Shyamalan movie in quite a while – despite the drubbing it was understandably bound to get.

EARTH‘s effectiveness stems from Howard taking an intimate approach to what might otherwise be a gigantically scored sci-fi epic. While that visual, and symphonic scope is certainly here, AFTER EARTH stands as one of Howard’s more atypical and stripped down scores for a movie involving space ships and mutated beasts. He smartly emphasizes the real-life bond of father and son actors with a tender piano theme and strings that track the transition from scared kid to man-warrior. And with all sorts of creatures waiting to kill him in the terran jungle, Howard unleashes a virtual future zoo of menacing ethnic textures caught somewhere between an overrun African and Chinese landscape. AFTER EARTH is very much of an emotional rumble in this jungle, one that’s even more interesting, and effective when going for the big alien beast battle in the climax.

Sure this might not be SIGNS for Shyamalan, but at least AFTER EARTH is a start back in the right direction, even if Howard has always been on sturdy musical ground all alone- terrain that he never fails to explore to interesting, powerful effect with AFTER EARTH.

Clink on the link to Purchase the AFTER EARTH soundtrack