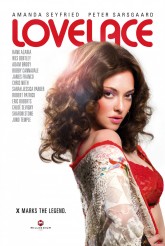 DEEP THROAT is a movie that everyone of a certain age, and many younger people, have heard of, whether they’ve actually seen it, not seen it or would rather die than see it. Its star Linda Goreman, who went by the screen name of Linda Lovelace, was for a moment in 1972 the face of the adult film industry. Then she left her producer-husband Chuck Traynor, the adult film industry and the public eye, remarrying and resurfacing years later as an anti-pornography crusader.

This gives the movie LOVELACE quite a lot to deal with. Some reviewers have said the film gives two versions of the story, but it actually tells a single story with two increasingly divergent aspects – the goofy, fairly funny tale of DEEP THROAT’s production and unexpected mega-success, and the domestic drama bordering on horror story of the relationship between Linda (Amanda Seyfried) and Chuck (Peter Sarsgaard), which starts out like many a tale of a young woman who sees in her slightly older lover a path away from a stultifying home life and ends in brutal physical and emotional abuse.

Directors Rob Epstein & Jeffrey Friedman and writer Andy Bellin do an expert job of capturing the look and feel of the late ‘60s/early ‘70s, when everybody wanted to be groovy and mellow and agreeable, and when police, alas, did not take abuse within a marriage seriously.

Seyfried is remarkable as Linda, showing the woman’s duality of hope and fear, acquiescence and anguish, in sequences that require a multitude of conflicting emotions. Sarsgaard is highly effective as the initially charming, later self-pitying, grandiose and malicious Chuck, who cannot see that his rage is destroying his meal ticket. Other standouts in the strong big-name cast include an unrecognizable Sharon Stone as Linda’s rigid mother and Adam Brody as a sweet-natured, funny Harry Reems.

Taken entirely on its own terms, LOVELACE works pretty well, though given what finally happens, we wonder why Linda waits as long as she does to reach out for help and what intermediate steps occurred to get her across the chasm of her old life and her new one. The story gets a bit muddy in its latter sections, as a key character played with authority by Chris Noth is fictional, raising questions about how Linda actually did split from Chuck. Furthermore, if Chuck was the completely useless loser he is shown to be by the end of the film, how (as the end credits inform us) did he stay in business with some of the same people who’d seen him at his worst? These questions tend to distract from the experience of the movie.

One can view LOVELACE as a chronicle of its times, a partial comedy shot through with darkness, or a violent, disturbing drama with long bouts of comedic absurdity, or a character study of a woman who fell down a dangerous rabbit hole and found her way out again, or all three. It would be good, though, if the climax felt as sure-handed as all that precedes it.