The human resistance strikes a major blow against the first race of aliens to invade Earth, but now faces some tense moments as they try to understand the intentions of the latest one. 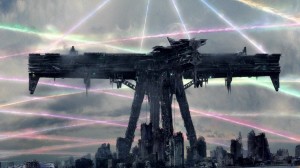 I could probably forgive FALLING SKIES for not being the clever, thoughtful, morally ambiguous post-apocalyptic Sci-Fi show I would prefer it to be if it were able to string together a few more purely entertaining episodes like last week’s “Journey to Xilbalba.”  But my takeaway from “Brazil,” FALLING SKIES’ Season Three finale, is that I’m just not to get anything like that from this show on a consistent basis.  Despite a dark, intriguing premise, FALLING SKIES just doesn’t have any groundbreaking ideas, is committed to its black and white worldview, is stuck with its bland characters, and can’t find a way to be consistently exciting either.

Case in point:  When we last left the human resistance, they were preparing for a major showdown with their alien occupiers the Espheni.  After committing to an uneasy alliance with The Volm, the third alien species this show has introduced, Tom Mason (Noah Wyle) was able to convince his comrades to allow the apparently friendly aliens to build an enormous weapon in an underground bunker next to the human outpost in Charleston.  The purpose of the weapon (basically a large ray gun) is to destroy the defense grid, a laser force field that the evil Espheni have used to encircle the Earth, and which will eventually irradiate everything in it.  The Espheni power this force field from towers they’ve built in the remains of major human cities, and the humans must attack and destroy one of the towers in order to smash the defense grid, but not tip the Espheni off to which tower they will attack.  Meanwhile, the Espheni have planted a bug, (basically a series of creepy crawlies that allow the aliens to control a human host) under the skin of Lourdes (Seychelle Gabriel).  Lourdes, as the hidden Espheni mole, has just detonated bomb in the Volm compound, which killed all the Volm who built the weapon and knew how to use it, but left the weapon itself intact.

So far so good, right?  Things were starting to look bleak for our heroes, and that’s a great way to build up excitement for the season finale.  So how will they respond this week?  Well, apparently by figuring out how to use the Volm weapon with no difficulty and carrying out their successful attack on the Boston tower with no casualties, wrapping up all of this by the first commercial break.

Once the defense grid is destroyed, the Volm ship, carrying the remainder of the Volm species, is able to enter the atmosphere and land on the remains of the Boston tower.  Here is where the story could have become much more interesting if it wanted to, but then it didn’t want to.  The human survivors are nervous about what comes next, now that their technologically superior allies have landed.  The rebel Skitters, (the humans’ other, much less important to Season Three, alien allies), are spooked and decide to leave town until they know what the Volm are really up to.  So, what are they up to?  Are we about to find out that “To Serve Man” was really a cookbook?

It starts out looking that way, with Tom and Col. Weaver (Will Patton) going aboard the Volm ship, only to find out that the Volm do not want the humans’ help going after the Espheni.  In fact, surviving humans are all to be relocated to Brazil while the aliens fight it out in the rest of the planet.  Obviously this doesn’t sit well with Tom and Weaver, but there isn’t anything they can do, since they’re hopelessly outgunned by the Volm.  Or is there?  Apparently Tom can make a speech about how important it is for humans to fight on against their oppressors, and that’s all it’s going to take to change the aliens’ minds on this matter, because they aren’t such bad guys after all.  Apparently all the other races the Volm have helped to shake off the yoke of the Espheni in the past have accepted the relocation offer and were content to sit on the sidelines while the two bigger dogs scrapped over the fate of their planet.  The Volm Commander (whose name is a multi-syllabic hodgepodge of grunts and clicks, and is the father of Cochise (Doug Jones) who’s been advising the humans since the beginning of the season) is pretty impressed with how strong the human spirit is, and gives a couple brief but impassioned speeches of his own stressing this point.  I’m sure this unexpected praise will prove very polarizing to FALLING SKIES’ audience, with human audience members justifiably quite proud and non-human audience members suitably ashamed.

Anyway, that’s the big resolution to the Espheni defense grid problem.  “Brazil” also reveals that Anne Glass (Moon Bloodgood) and baby Alexis are really still alive and are now freed from their captivity at the hands of the Espheni, although the twist is that Alexis is now a six-year-old girl after having been born only two months prior.  I went over why no one should be shocked by the news of their survival in last week’s recap, but I should probably mention that nobody has been given any reason to be shocked at baby Alexis’ transformation, either.  Even the characters don’t seem particularly shocked.  FALLING SKIES had already sucked all the marrow out of this revelation when infant Alexis was creepily hitting developmental milestones too quickly, and, if that wasn’t enough, by flat-out telling us she was a human-alien hybrid after having the characters test her DNA.  The only real question anyone should have had was whether she’d be a child, a teenager, or an adult when the show finally brought her back.  Making six-year-old Alexis the pied piper of sub-dermal bugs was a nice, unexpected touch, though, and the image of her holding out her hand and watching the bugs crawl out of Lourdes’s eyes and into her palm, where she squishes them, resonates as being appropriately creepy.

But ultimately, as Season Three of FALLING SKIES concluded, I was left wondering what the point of it all was?  This season’s signature achievement was adding another race of friendly(ish) aliens to the proceedings, and dramatically improving the chances of its human characters surviving their first alien apocalypse, albeit to inhabit a completely transformed world.  The problem with that resolution is that the friendly Volm weren’t very interesting to begin with (something I’ve gone over and over in previous recaps), and whatever mystery or implied menace they might have had going for them was dispelled by the Season Three finale.   No suspense or excitement has been added by bringing the Volm into the world of FALLING SKIES, and by evening the balance of power between the heroes and the villains, they’re making an alien invasion feel like less of a big hurdle for our human characters to overcome.  I can’t think of anything worse for an alien invasion show to do to itself, and I hope they find a way to rectify this situation in Season Four.