After another deadly act of sabotage by the enemy mole that walks among them, the residents of Charleston struggle to save themselves from the collapse of their underground bunker. 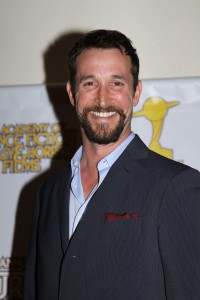 After faltering last week, FALLING SKIES rebounds mightily this week with “Journey to Xilbalba,” the strongest episode to date of this series’ wildly uneven third season.  While not entirely free of some of the show’s most exasperating elements, the pressure cooker of a plot makes it so that nearly every character is in mortal danger throughout, and this is responsible for all of the episode’s successes.

“Journey to Xibalba” begins with Tom Mason (Noah Wyle) returning to Charleston on a sailboat that he’s apparently commandeered, which more or less sets the record straight about what happened to him in the previous episode; he really did escape from the Espheni tower where he’d been held captive and tortured.  Tom wastes no time and goes straight to his sons, Hal (Drew Roy), Ben, (Connor Jessup) and Matt (Maxim Knight), to deliver bad news.  While being held prisoner by Karen (Jessy Schram) and her Espheni allies, he was shown the bodies of Anne (Moon Bloodgood) and their baby daughter Alexis, and he is both firm and direct as he tells his sons about the death of their stepmother and sister.  This would be an incredibly rough scene to watch if we believed that Anne and baby Alexis had really been killed, but I’m guessing not many in the audience do.  While we haven’t been given any direct indication yet that they’re alive, the circumstantial evidence is pretty overwhelming.  For instance:

Anyway, whether Anne and Alexis are really gone, I do like the way this trauma has changed and re-focused Tom, who gets to lose the tiresome boy scout image momentarily and now lets everyone know that what guides his actions are rage and hate for the aliens.  And the fact that he asks Pope (Colin Cunningham) to shoot him if he starts to show signs that he has one of those alien bugs in his head and is possessed by the enemy again gives a pretty good indication that Tom is not, in fact, possessed by the enemy again, (because after this conversation that would be a really lame move by the writers), and is a nice way of demonstrating how thoroughly his rage is focusing him.

Speaking of possessed by the enemy, (because at least one of these characters always is), Tom has barely finished his talk with Pope when Lourdes (Seychelle Gabriel), who is the unlucky recipient of an actual alien bug, blows up the Volm complex nearby and kills nearly all of the friendly aliens.  The Volm leader Cochise (Doug Jones) survives, however, and Lourdes feigns an injury of her own to get placed in the hospital bed next to him, so that she can finish the job before he regenerates, (because apparently he regenerates).  But she’s also placed some kind of alien tentacle bomb on the wall of the underground bunker that houses Charleston’s living spaces, and the result of the ensuing explosion is a massive cave-in that seals most of the Charlestonians down below, with every entrance and exit blocked by rubble.

Hal and his girlfriend Maggie (Sarah Sanguin-Carter) are separated from the others and trapped in a room that is rapidly running out of air.  Their struggle to escape, and their ensuing disagreements about the best way to do this, all of which end in failure, was especially tense and compelling, and their rescue by Ben and Matt was satisfying.  Also a nice touch was that above ground, Pope finally shows some actual personal growth and offers Col. Weaver (Will Patton), who fears his daughter might have died in the collapse, some much needed reassurance.  FALLING SKIES has really kept Pope around as a pesky, amoral troll for much longer than was really necessary or plausible, given his obvious intelligence and some of his recent experiences, and it’s nice to know that the days of this being a constant source of annoyance for the viewers might be coming to an end.

Eventually, Tom’s discovery of the identity of the mole, (after Lourdes lets loose a slip of the tongue that reveals she has information only the Espheni would have about Tom’s recent capture and escape), also solves the problem of how they will escape their death trap.  Once Lourdes has been made, Tom takes away her alien blaster gun thing that she used to kill President Hathaway in a previous episode.  He then uses it to blast through the rubble.  None of the major characters die in this episode, but we’re led to believe that the result of the two explosions are mass casualties that leave the population of Charleston diminished greatly, and all of the Volm, besides Cochise, dead.  The Volm weapon, the allies’ only hope of destroying the Espheni defense grid that surrounds the planet and will destroy all of its organic life in three months, is apparently still functional but all those who knew how to operate it are now gone.  So the episode leaves a suitably bleak picture for the survivors and offers a nice lead-in to next week’s FALLING SKIES season finale.

My major complaint about “Journey to Xilbalba” is about Cochise, who I’ve never really been comfortable with.  Perhaps it was the strange leap forward in off-screen time that marked the beginning of Season Three, and caused the Volm to appear as though conjured from the ether and not be properly introduced as characters that’s lead to my unease with the story element.  But more likely it’s that, unless FALLING SKIES plans on doing a dramatic reversal regarding these aliens in the finale, Cochise and the Volm just seem like beings who wandered in from another Sci-Fi series that’s less grounded it our reality, (like one of the mid-90s STAR TREK series’ where new latex-headed alien species could pop up every week).  That incongruity makes it impossible to suspend disbelief when watching Cochise interact with the humans on this show.

In his present form, Cochise, a benevolent, English-speaking, erudite, bipedal, five-fingered, average height, average build, male who talks about having a brother, is a failure of imagination as an alien.  His species seems so conveniently like ours that the human characters, who ostensibly once inhabited the same world we do now and not a space station in the year 2200, should reasonably be trying to rip his mask off to find out if someone’s playing a practical joke on them.  The imagination that lead FALLING SKIES’ creators to give us a world invaded by creepy spider beings that communicate by radio waves should not cop out and give us another batch of aliens who are drawn this lazily.  And questions about the Volm’s intentions have largely crowded out the far more intrinsically interesting questions about the Skitters’ origins and motivations this season, which feels like a huge break in the series’ momentum.

On the plus side, the fact that the Cochise character apparently just experienced the death of his entire species and still went on to offer Tom some treacly platitude about how the human spirit is a gift, or something, means that he and the Volm probably are too good to be true, and that maybe FALLING SKIES’ creators aren’t going to let them linger in their present form.  Whatever they decide to do with these guys, however, they should continue to ratchet up the peril and uncertainty for the remaining humans of Charleston, because, as it was in “Journey to Xilbalba”, this show is at its best when none of the characters are given a chance to catch their breath.