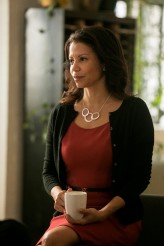 Tom mysteriously finds himself back in his old, pre-alien invasion life, and must uncover the truth about what’s happening to him.

“Strange Brew” begins very differently than we might have expected it to, given that the FALLING SKIES episode that preceded it climaxed with Tom Mason (Noah Wyle) being captured by the Espheni, the alien menace that has invaded earth.  Instead of keeping us in the present, with the aliens and the war for humanity’s future and whatnot, “Strange Brew” spends its first half hour in what appears to be Tom Mason’s pre-invasion past.  After waking up in his own bed next to his late wife and recounting a bad dream he had where “aliens invaded,” we get to see Tom going through a typical day in his old routine as a history professor.

By casting the other FALLING SKIES characters in various roles as a part of Tom’s former life, (and saddling them all with clunky dialogue), we suspect we’re getting a glimpse of the strategy the aliens are employing with Tom’s interrogation – to create a delusion in his mind that this imagined reality is “the real world,” convince him that he created the alien invasion out of whole cloth, and/or offer him the option of staying in this ideal reality in exchange for giving up information on his comrades’ real life war plans.

That’s where I thought they were going, anyway.  It’s actually not as interesting as that, however, as the characters in his new world make their intentions obvious by repeating the same questions of Tom, (“Will X event happen in New York, Boston, Chicago, or Jacksonville”), until the repetition of this query makes him so suspicious that he has to question the integrity of the world he’s experiencing, and ultimately decides it’s not real within a half an hour.

He wakes up in the aliens’ lair strapped to a table, is then apparently rescued by his comrades, and then asked is asked a variation on the same question by his rescuers, which cues him to the fact that this rescue is also a delusion.  The aliens get made again, and they apparently give up the ghost of trying to get information out of Tom in this manner.  (So the preceding 30 minutes are revealed as a half-successful exercise in style by the show’s creators, but not a particularly convincing diabolical plot on the part of the aliens).

Subsequently, Karen (Jessy Schram), the alien’s mouthpiece, tells Tom that the Espheni will torture both his new wife Anne Glass (Moon Bloodgood) and his infant daughter Alexis, (who they also captured two weeks ago) to get Tom to tell them what they want to know.  She tops that later by showing Tom the bodies of Anne and Alexis in some kind of capsule under a pile of debris, explaining that she’s killed them.  Then Tom escapes from aliens and goes to the post-apocalyptic version of his family home back in Boston, where his late wife appears to him again and tells him “not to come back here.”  It’s not clear which part, if any of this, is real, and, as such, I never felt very invested in it.

Maybe because I’ve never felt much affinity for Tom as a protagonist, and seeing his flawless, unimpeachably moral pre-invasion life depicted this way just served to distance me from him even further.  His character has always been a boy scout, and while I think I might enjoy watching a drama where a protagonist like Tom has to fend of a spurious sexual harassment charge from an obsessed graduate student, I’ve never really enjoyed watching this character guide us through an action-adventure show where he has to make the hard choices necessary to save humanity from extinction.

This feeling was especially pronounced during “Strange Brew,” where, despite psychological and physical torture, Tom is never really forced to make any hard choices, and the resolution of his problems is vague to the point of inconsequence. That’s my biggest problem with “Strange Brew,” and with Tom in general:  The more they tend to show us of him, the less interested I become.