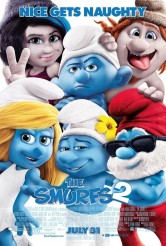 Family fun with a Smurferrific moral!

Rarely do I get to sit with my 10-year-old daughter and enjoy a movie equally as much as she does. But, alas, I did just that watching THE SMURFS 2. A fun and tender story about choosing how you want to live your life and that family isn’t necessarily something you are born into.
SMURFS 2 opens with the diabolical Gargamel (Hank Azaria) plotting to kidnap Smurfette and drain her blueness – albeit her powers – from her along with two quasi Smurfs he created – who aren’t blue and kind but gray and naughty. Simultaneously, back in the live action world, Patrick (Neil Patrick Harris) is celebrating his son’s birthday when his ne’er do well step father (Brendan Gleeson) comes for a visit. Well, the uptight Patrick has no patience for his stepfather whom he never really saw as a father figure anyway.
Somehow, the blue world meets the real world. Patrick sets off with family in tow to rescue Smurfette while Papa Smurf and others rush to save Smurfette before it’s too late and she gives the evil Gargamel the secret ingredients to the Smurf formula.
The action keeps the kiddies entertained while the story makes a very conscience effort to have a point and not just be summer fluff for the kids to watch and the parents to dredge through. Patrick learns to accept and appreciate the family he has been given, as does Smurfette. Their journeys coincide nicely as they are wrapped up tidily at the end. It’s nice that the SMURFS 2 filmmakers remembered who takes the kids to the movies and didn’t forget to throw the adults a bone.