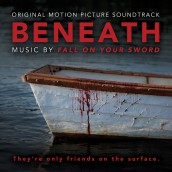 CD review: BENEATH and WE STEAL SECRETS

Whether it's scoring killer fish or Wikileaks, Fall On Your Sword stuns with their unique sound 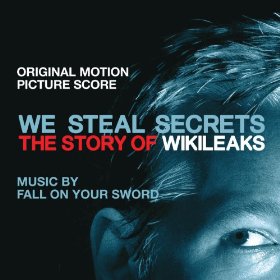 Spinning out a groovily weird indie score beat with the likes of ANOTHER EARTH, 28 HOTEL ROOMS and NOBODY WALKS, the collective called Fall On Your Sword (otherwise known as Will Bates, doing that Daft Punk mask think on his company’s website) has managed to sound different with each soundtrack, especially when dealing with the dual horrors of killer fish and our government’s clandestine activities. Probably the wackiest, and perhaps creepiest musical-design treatment that a mega-piranha has yet gotten, BENEATH uses teeth-scraping metallic effects and berserk buzzing, so much so that the score’s subject feels like it’s about a swarm of killer bees. There’s much cleverness to be had with a solitary rowboat of fresh young meat, from country-jazz to the real, chilling deal of a solo violin and off-kilter strings that capture the seemingly placid water. Sword’s score floats effectively on Graham Reznick’s “ambiences,” which often sounds like sonar on the prowl. BENEATH might be a bit Avante garde in approach, but there’s certainly enough musical content with water-like harps and mournful voices to hook in adventurous listeners already out to snag the cool outer limits in sound design scores.

Sword’s electric sound is particularly apropos for WE STEAL SECRETS, Alex Gibney’s documentary that reveals the ongoing saga of the secret-disseminating Wikileaks. Take a note from the repeating string rhythms and chamber violins of Philip Glass’ work, Swords’ pattering, throbbing modulations become the human ghost stealing from the machine. It’s high-tech suspense that’s as suitable for a conspiracy movie as it is a glo-stick rave, yet another Sword score that’s at the zeitgeist of soundtracks’ souped-up return to the futuristic synths that ruled back in the 80s. Here, they’re transformed here into rhythmically transfixing modulations that embody the sinister, sad calculations of power makers now getting their comeuppance through the audio-pulse of the social media.

Clink on the link to Purchase the soundtrack from BENEATH

Clink on the link to Purchase We Steal Secrets: The Story of WikiLeaks – Original Motion Picture Score

Article Source: Assignment X
Article:CD Review of BENEATH and WE STEAL SECRETS: THE STORY OF WIKILEAKS soundtrack

Tags: Beneath, Fall On Your Sword, Soundtrack Review, We Steal Secrets, Will Bates, review, soundtrack