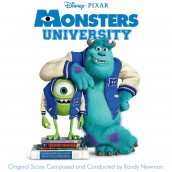 Randy Newman has fun in his old haunts

As the composer who first put Pixar on the CG toon map with TOY STORY, Randy Newman has had a gleefully antic time with the company’s armadas of cute playthings and bugs. Perhaps it was because the creatures of MONSTERS, INC. were far more furry friend than fiend that Newman’s Carl Stalling-esque approach stood out for its mischievousness and warmth- his over-the-top toon sound perfect at playing a one-eyed goblin and giant blue beast as big softies. Now Randy Newman gets to return a decade later with Mike Wazowski and James P. Sullivan in this winningly pleasant prequel that takes the duo back to school, allowing the composer to incorporate a collegiate sound to his entertainingly portentous comedy stylings.

The G-rating insures that we aren’t going to see any ANIMAL HOUSE-like antics in MONSTERS UNIVERSITY, Newman’s score certainly has some of the more robust musical academia since Elmer Bernstein pitted the slobs against the snobs – with the contest here pitting a similarly hapless (if far more mild) fraternity against the scare jocks. Brass trumpets ivy-covered halls of academia, while cheer anthems abound for the pride of the Monster Alma matter, giving a thematic backbone to the film’s many invertebrate characters. Newman’s score remains delightfully of-the- Bugs Bunny-cum-Monster moment, veering from Newman’s love of jazz (played here for big band action and ragtime rhythm) to rousing sports game excitement and wannabe terror at the drop of a gag. It’s all very much of a hellzapoppin piece with Newman’s other Pixar work, and just as rambunctiously enjoyable at that.

While Newman’s Disney scores are always dizzying in their exuberance, there’s a real nostalgic warmth to them, the sense of returning to the bosom of old buddies – a feeling that’s also very much part of all of his best dramatic works like AVALON and AWAKENINGS. While there’s no reason for Newman reduce us listeners again to weeping wreaks as he did for the ending of TOY STORY 3, MONSTERS UNIVERSITY is full of sweet melodic feeling that leaves little doubt that Mike and Sully are destined for a greatness. And it’s exactly these kinds of Newman scores that are a big reason we keep coming back to the Pixar brand, where Newman remains at the head of the class.

Clink on the link to Purchase the MONSTERS UNIVERSITY soundtrack