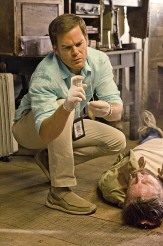 “What’s Eating Dexter Morgan?” shows us a side of Dexter (Michael C. Hall) that we don’t often see – namely, the grossed-out side. Dex is a serial killer, but when he encounters the contents of a refrigerator belonging to a cannibalistic workout equipment salesman, he’s sickened.

This episode of DEXTER can use the dark levity, as Deb (Jennifer Carpenter) continues to spiral out of control. Dex gets her to agree to go out to dinner with him. At the restaurant, Dex points out a man Deb saved last season, an innocent out with his family who is still alive because of Deb’s actions. Dex tells Deb she’s a good person. Deb seems to hear him.

But the next day, Deb shows up very drunk at the police station and confesses to Quinn (Desmond Harrington) that she killed LaGuerta. Quinn understandably at first thinks Deb is being metaphorical. He calls in Dex, who brings Dr. Vogel (Charlotte Rampling) with him. Dex and Dr. Vogel get Deb out of the police station. Dex decides that Dr. Vogel can help Deb and handcuffs Deb to the couch so that she will listen to Vogel and not get violent with her. Then Dex leaves the house. He kills the cannibal, but he says that he realizes he consumes the ones he loves.

This last is a nice bookend to the episode’s opening, when Dexter finds that little Harrison has eaten an entire box of popsicles. When Dex asks his son why he’s done this, Harrison replies, “Because I love them!” (A good answer for many occasions.)

Dex of course is buried in his usual particular mindset, so it’s understandable why he doesn’t see Vogel as a threat, but given everything. Vogel has said about feeling that Deb is a danger to him, our danger meters are going off the scale here. The only thing that gives us hope that Vogel won’t kill Deb in the next episode is the meta expectation that DEXTER won’t take MVP actress Carpenter out of the show before the finale.

Rampling continues to impress with her smart, insinuating Vogel and Carpenter again puts across Deb’s whirlwind of rage and shame with huge impact. Hall plays Dexter here with a kind of soft rawness that is typically reserved for scenes between Dex and Deb. As almost everything Dex does in this episode is because of Deb, the actor keeps his character continually aware of the stakes, which in turn leave him vulnerable. It’s an effective choice.

So DEXTER finally visits the popular serial killer topical destination of cannibalism, but it’s almost a throwaway in terms of what’s going on in the episode. The main characters and their bone-deep issues continue to propel the season and grip us on a visceral level.