An episode at the heart of Deb’s feelings about Dexter 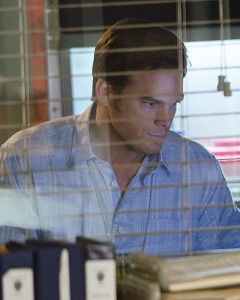 Every since it happened, most of the DEXTER audience has been wondering about the choice Deb (Jennifer Carpenter) made in the shipping container, when she shot LaGuerta (Lauren Velez) to protect Dexter (Michael C. Hall). In “Scar Tissue,” we and Deb – and Dex – get to revisit that choice. At the same time, we see that Vogel (Charlotte Rampling) is a better therapist than she’s seemed so far, that Quinn (Desmond Harrington) has the makings of a sergeant and that, as usual, there’s no shortage of killers in Miami.

Dex and the team are called in on a case where a young woman has been murdered; the method suggests it’s someone she knew. At the same time, Dex continues to run down the list of Vogel’s former patients. A.J. Yates (Aaron McCusker) has scar tissue on his head in the same area where the Brain Surgeon has been removing parts of people’s cerebral matter. Dex examines the guy’s house and finds a collection of individual women’s shoes – and eventually a young woman who has been stabbed. Dex leaves her at a nearby emergency room.

Vogel seems to get through to Deb by bringing her back to the shipping container and insisting that Deb is a good person who was forced to make an impossible choice. Vogel contends that Deb’s biggest problem with herself is that, deep down, she knows if she had to make the choice between LaGuerta and Dex again, she’d once more choose Dex. Deb seems to take this on board and even stops drinking on the job.

Meanwhile, Dex sees his case files on Vogel’s computer and is furious by Vogel’s written conclusion that Dex’s emotions aren’t real. He tells Vogel that once he finds the Brain Surgeon, they’re done.

Deb comes by the station to see Dex. Quinn is very happy to see Deb – maybe too happy. Deb says something that could be construed as a loving goodbye in light of what happens shortly thereafter. Deb tells Dex they need to talk. Dex is overjoyed that Deb is willing to speak with him again. Deb suggests they go for a drive. She asks if her biological father/Dex’s adoptive father Harry (James Remar) committed suicide as a result of Dex acting on his homicidal impulses, i.e., “the code” as it was devised by Harry and Vogel. Dex says that he was told a few years back that Harry overdosed intentionally on his heart medication. Deb says she can understand – but that Harry only got it half-right. She then grabs the steering wheel and sends the car plunging off an embankment into a lake.

However, when Deb is pulled out of the car by a heroic bystander, as she sees the car sinking, she dives into the lake and pulls Dex out to safety.

This is about the most effective and literal illustration possible of Deb’s ambivalence. Trying to kill Dex and herself and then finding that she doesn’t want to let him die if she’s going to live is as clear as it can get. While anything can (and often does) happen on the show, it would seem as though perhaps Deb is on the road to at least being able to acknowledge to herself that she doesn’t want Dex dead. As for Dex, this should finally get him to have a real sense of how hard his sister has been hit by all that has happened.

Rampling and the show are playing it as though Vogel has a secret as yet unrevealed. Let’s hope it’s not that she’s really the Brain Surgeon; something like this was tried in Season 6 and it didn’t play out well (or even plausibly within the DEXTER universe).

The reminder that Quinn is still in love with Deb – although he won’t admit it to anyone – is intriguing, and Harrington continues to bring a convincing, paradoxical mixture of arrogance and shame to the character. We feel bad for Quinn’s current girlfriend Jaime Batista (Aimee Garcia) – she’s too nice and unconflicted for him.

Mainly, though, we want to see where Dex and Deb are going. Out of the lake and into the fire, most likely.