under the dome season 2 news

Breaking News: UNDER THE DOME renewed for Season 2 – TCA 2013

Plus Stephen King will write the first episode of Season 2 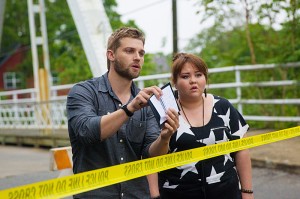 “It’s official, and Stephen King will be writing the first episode of that 13-episode arc,” says Moonves. “We’re really proud of  what UNDER THE DOME has done. It sort of changed the face of summer television. The highest premiere of a drama, since, I think, 1992. It’s the way television should be. It’s the way television can be. Obviously it’s a very different model.”

With summer programming being difficult to finance and to be financially successful, Moonves does admit, putting on a summer show is hard, but they found the model that worked for UNDER THE DOME.

“A lot of people, including us, brought in Canadian exports [for summer series], which was very cheap,” says Moonves. “And it’s how do you figure out financially how to put on a show of that size and scale And it came down to license fees, by definition, in the summer have to be small. So it was because of a huge international sale of the show [UNDER THE DOME], as well as the participation of Amazon. And we had to make a deal unlike any we’ve ever made.”