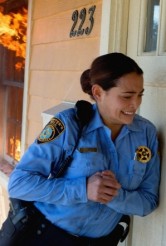 Fire happens. Lots of other side plots and little dome activity. Plus horrible acting. 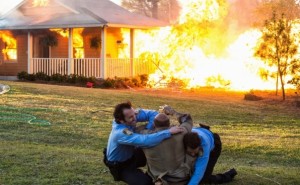 “It means (long dramatic pause) … we’re all gonna die in here.”  – Norrie (Mackenzie Lintz) on UNDER THE DOME “The Fire”

The thing that cracks me up most about Stephen King made-for-TV specials has always been the acting. Or lack of it. While UNDER THE DOME may be interesting from a pure storyline point-of-view, the acting and dialogue in the first two episodes is absolutely atrocious.

Wooden and uninspired I find myself laughing at moments not-deemed to be funny because of how something was delivered or just how stiff the acting was during a moment. It’s hard to get past actually and try to enjoy this show for what it is – a no brainer action drama. In the first episode alone we are to believe that the dome that fell killed like a hundred people in this small town? After one or two accidents wouldn’t people get the hint? Or that a small town holds one seriously corrupt mafia-type councilmember (albeit maybe the best character on the show)?

Most of this show and most of “The Fire” dealt with everything going on that did not involve the dome itself. Barbie (Mike Vogel) trying to find dog tags that he left after killing Julia’s (TWILIGHT’s Rachel Lefevre) husband. Big Jim’s (BREAKING BAD’s Dean Norris) attempt to cover up whatever it is that might have brought the dome in the first place (although probably a red herring). Junior’s (Alexander Koch) continued descent into madness.

The only real dome related activities revolve around Julia’s reporting on what the hell it actually is and the eavesdropping of the local radio station on the military. Oh, and the two kids who seem to actually be doing the most in the entire town. Obviously with a 13-episode slate the show needs to have side stories and tangents and apparently this show needs that much more of them because really what can you do with a dome? Once you’ve kicked it, thrown sh** at it, burned it, rammed it or poured water on it, what else can you really do? Maybe we will find out. But after the initial cow getting split in half and the plane flying into the dome and the truck smashing, I wouldn’t expect too many more interesting things to be happening … although I could be wrong and I will gladly be wrong if it is worth a damn.

“The Fire” itself didn’t even happen until 42 minutes into the episode as the corrupt priest made a boo-boo by 1) starting a fire indoors, 2) starting a fire by a conveniently placed highly-flammable window drape, 3) having an extremely evil laugh while starting said fire (which always gets you in trouble).

Of course, it was blown out of proportion complete with totally illogical house explosion. If we don’t contain the fire it will consumer the whole town! OMG run for your lives!