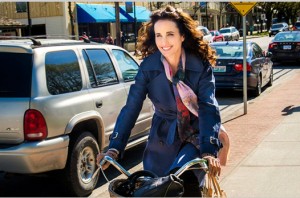 DEBBIE MACOMBER’S CEDAR COVE, in its first year on Hallmark Channel Saturday nights, is based on the popular series of novels about a small Northwestern coastal town where people are neighborly, the scenery is beautiful and the atmosphere is generally upbeat. Andie MacDowell stars as family court Judge Olivia Lockhart.

MacDowell is best known as a feature film actress, who memorably debuted as Jane in GREYSTOKE: THE LEGEND OF TARZAN and has subsequent credits that include GROUNDHOG DAY, SHORT CUTS, FOUR WEDDINGS AND A FUNERAL and the FOOTLOOSE remake. The South Carolina native, who says people continually mistake her for a Texan – “Texas is a huge state, when people have a Southern accent, I don’t know why, they assume that I come from Texas” – has previously made a few forays into series television with the short-lived LONE STAR and JANE BY DESIGN, but CEDAR COVE is her first carry-the-show lead.

MacDowell is at Hallmark’s presentation for CEDAR COVE at the Television Critics Association press tour, where she takes some time to talk about her new show.

ASSIGNMENT X: Had you been looking to do a series?

ANDIE MacDOWELL: Well, I’d been working on one, JANE BY DESIGN, and had a great experience doing that. This [CEDAR COVE] came to me, it was offered to me, I read it and I really liked the story. Knowing Debbie [Macomber]’s success played into my decision, and I just felt Cedar Cove was a wonderful place to live. I thought, “I’d like to live in Cedar Cove.” I liked the idea of a community where everybody really gets along and they care about each other and things are just simple. I think the world’s so crazy right now and scary and difficult – especially if you live here, you see violence and helicopters – the idea of being able to escape for an hour and watch something where everything is peaceful appeals to me.

I relate very much to this. I feel that this is more me than Gray was on JANE BY DESIGN. That was not me at all. But I think this is a very relatable character to me. That’s one of the things that appealed to me. Also, the idea of getting to go to work every day and be in a place that the content of the show is something that makes you feel good.

MacDOWELL: She’s really smart, she cares about people, she has an opinion, she’s independent – I think that she’s a lovely mixture of being feminine, but at the same time, extremely capable. She’s vibrant and intelligent and she could have a debate with a man easily without losing her femininity.

I think that she does have to be careful. That’s one of the reasons she’s friends with Grace [played by STARGATE SG-1 alumnus Teryl Rothery], is because Grace has such freedom. Olivia feels that she has to watch herself and be a little bit on guard because of the position [as a judge] that she has within her community. She doesn’t have the ability to have the same freedoms. And Grace pushes her a little bit to take chances.

AX: CEDAR COVE shoots in Victoria, British Columbia. Had you worked in Victoria before?

AX: Is there any difference in working there than working here in the States?

AX: But the approach to the work is pretty much the same.

AX: Anything else you’d like to say about CEDAR COVE?

MacDOWELL: No, I just hope people tune in and they enjoy it. That’s it.