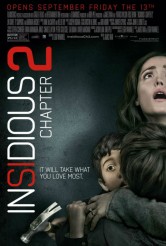 Sometimes scary, but with schizophrenic storytelling

Usually, when watching a sequel, it helps to have seen the original. However, in the case of INSIDIOUS CHAPTER 2, people who haven’t seen 2010’s truly creepy INSIDIOUS may be at an advantage. The storytelling is a bit choppy and seems to borrow from a number of sources, including A NIGHTMARE ON ELM STREET: DREAM WARRIORS, but it still may be easier to follow for those who don’t remember the first film and want to yell “Retcon!” in a number of places.

In the original INSIDIOUS, the Lambert family – dad Josh (Patrick Wilson), mom Renai (Rose Byrne) and young sons Dalton (Ty Simpkins) and Foster (Andrew Astor) – suffered in what appeared to be a terribly haunted house. However, they soon learned, as the film’s ads proclaimed, “It isn’t the house that’s haunted.” Instead,Dalton is being menaced by demons from a realm known as the Further. It turns out that, as a boy, Josh was being stalked by these same entities, but they were held at bay by the actions of medium Elise (Lin Shaye), who had been summoned by Josh’s worried mom Lorraine (Barbara Hershey). Josh winds up having to go into the spirit realm to rescue Dalton – the boy is successfully rescued, but when left alone with Elise, Josh kills her, demonstrating that he is now possessed. Renai sees a photo taken by Elise’s camera, showing a demon where Josh should be. Josh is standing right behind Renai …

And that’s how INSIDIOUS ends. INSIDIOUS: CHAPTER 2 takes us back to 1986, when Josh is still a boy and Lorraine (played as a younger woman by Jocelin Donahue) gets her friend Carl (played as a younger man by Hank Harris and in the present by Steve Coulter) to summon his friend Elise. Elise and Carl manage to get Josh to suppress all knowledge of the supernatural, though it’s clearly all back in the present.

Then we’re in the present, in the immediate aftermath of Elise’s murder, and anyone who remembers the snap of the first film’s climax is going to be open-mouthed. Renai is being questioned by the police and says she doesn’t think Josh did it – not because she doesn’t want the cops mixed up in her family’s supernatural problems, but because apparently she forgot about or doesn’t grasp the significance of the demon in the photo where Josh should have been – even though she reacted in terror at the end of INSIDIOUS. An even bigger retcon is that, after all the discussion of parasitic entities and so on in the first film, it turns out we’re dealing with ghosts after all.

So what happened to the demons? Why can’t the spiritually sensitive Dalton detect that something is wrong with his dad Josh, who is behaving oddly in any case? Why don’t the police find forensic evidence linking Josh to Elise’s murder (although his body is possessed by an evil spirit, the act would still leave Josh’s fingerprints, bits of skin, etc., on the corpse)?

Director James Wan and his writer Leigh Whannell, who filled their respective positions on the first film and co-wrote the story, are still very good at delivering scares, which occur pretty regularly. However, where the first film got steadily creepier the more we learned, making “the Further” a truly terrifying realm, the exposition we get here tends to flatten things, with a background for the ghosts that is more hokey than horrifying.

One more gripe – not that every female lead in a horror movie needs to take after Ripley or Buffy, but Byrne’s Renai is an uncommonly wussy mother. Trying to protect her sons from a physical (as opposed to spectral) threat, it doesn’t occur to her to improvise a weapon of some sort, despite what looks like a handy supply of material within reach. There’s a fine line between creating suspense because a character is frightened and creating audience annoyance because a character is being overly passive, and there are times the film winds up on the line’s wrong side.

Wilson has a lot of fun with a part that calls for him to be by turns charming, chilling, agonized and raging. Byrne gives a performance that is credible (even when Renai’s actions are dubious) and writer Whannell and Angus Sampson reprise their original INSIDIOUS roles as a pair of psychic researchers who provide some welcome levity.

INSIDIOUS CHAPTER 2 isn’t as honestly terrifying as the original, but it rates as okay horror fun.