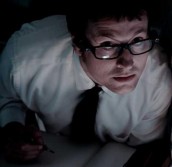 The writer and director talk effective horror without an 'R' rating

James Wan and Leigh Whannell have given audiences plenty of nightmares over the last several years. The directing and writing team (respectively) are the men behind such films as the SAW series, and DEAD SILENCE.

Their latest voyage into the world of horror, INSIDIOUS, opens this Friday, and despite its PG-13 rating is scaring critics across the country and being hailed as one of the scariest movies in years. The film involves a family that is being haunted, and one of the children’s life is in peril.

Wan and Whannell spoke about using practical on set effects, effective horror not needing an R rating, and what sort of effect they want this movie to have on young adults.

On using practical effects versus the almost standard CGI effects…

“It’s really what we wanted to do,” says Wan. “I’ve been reading people’s reactions saying that the end really went CGI. I had no CGI in this film! I think I should take that as a compliment that people think there is CGI in this film. It was all old school effects. If I wanted someone to walk up the wall I literally built a wall set and put it on the floor. It’s like Batman climbing up a wall from the old show. Everything in INSIDIOUS is Leigh and I wanting to hearken back to old school haunting films, and if you look at those movies like THE HAUNTING, all it is for a ghost is a guy’s face against a window. It’s a person and I find that so much more terrifying.”

“When I first met James it was at film school,” explains Whannell. “I remember watching this film James had made and everything he had accomplished with miniatures and stop motion and I became obsessed with that – with James’ ability to make a movie about a monster crawling out of a mountain and building the mountain out of papier-mâché. Then we’ll build a puppet. There’s something about these tangible effects that you can touch. I love CG for what it is, but you can’t touch it. It’s not in the room with you. Both of us are obsessed with Coppola’s DRACULA because everything was practical in that movie. So when it came to do this, we had a low enough budget that we didn’t have to argue with people. James could just say this was how he was going to do it.” 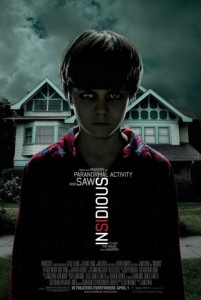 On the roots of their horror visions and what they can do to young actors….

“I felt very bad for Ty Simpkins,” says Wan earnestly. “I would say bout sixty to seventy percent of the film he shares screen time with Joseph Bishara who plays the demon. The little boy was eight when we shot the film and he was terrified of the black demon makeup and the eyes. This movie and pretty much a lot of what I’ve done deals with childhood nightmares. It deals with waking up in the middle of the night and wondering if there is a boogeyman under your bed or in your closet. Nothing signifies that more than having Ty there and the way he would react to the demon character. Joe is frightening when he is all done up in his makeup. He’s frightening to look at even in broad daylight. So you can imagine in a closed set when all the camera and crew are backed off and we’re shoving Ty in towards Joe in the corner. We do things that are polarizing to people.”

On whether or not this will become another franchise like SAW…

“No we never plan on that stuff,” shrugs Whannell. “We’re too superstitious about films especially when they are getting released. We have an attitude of cautiousness, and it would not be cool if James and I started talking sequels now. We might talk about it once everything has happened and the dust has settled, but I think it would be tempting fate. I can’t even say that world without feeling like lightning is going to strike. The voice of Charlton Heston says, ‘Sequel I’ll show you!’”

On having a PG-13 rating on INSIDIOUS….

“I’m not afraid that they will walk out of the theatre unconvinced,” proclaims Whannell. “If they can get to the theater and sit down and begrudgingly watch this PG-13 film –  I believe the film is scary enough they will walk out convinced. If they don’t go see the film at all and don’t buy the tickets based on the rating, I think they’re making a foolish move. You can’t write in dead and scares, you can write in sex and violence. The juice is not writable stuff. It’s not necessary for this particular genre. If we were making a zombie movie together we would want to make the most extreme zombie film ever. It’s in our nature to do things that haven’t been done before. So people watching the zombie movie would see it and wouldn’t believe how f***ing crazy it was, but, we’re not doing that. It’s not necessary, I feel like it would be clutter to have a ghost come in, tear someone open, and start eating their entrails.”

“I don’t know how to make it R rated, let’s put it that way,” defends Wan. “I made the film I wanted to make and it just so happens that it’s PG-13. I’ve heard a lot of people say that they couldn’t believe it was a PG-13 movie. I want people to be traumatized the same way I was when I watched JAWS when I was a kid. POLTERGEIST was PG as well, and things did change to PG-13 until INDIANA JONES AND THE TEMPLE OF DOOM came out. I don’t believe the rating dictates the quality of the film or the scariness. David Fincher said that he was scarred for life by JAWS and his aim as a filmmaker is to make films that scar. That’s us with this film, the kids you’re talking about seeing this I hope can get in because of the PG-13 rating. I want kids to be unable to leave their bedrooms for five years!”