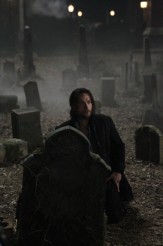 Promising fantasy/horror with a sharp cast 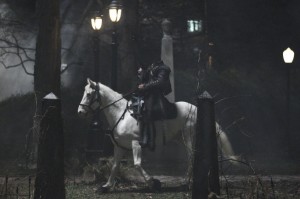 The new Fox series SLEEPY HOLLOW is loosely based not only on Washington Irving’s story “The Legend of Sleepy Hollow,” with Ichabod Crane being terrorized by the Headless Horseman, but also on Irving’s Rip Van Winkle, in which the protagonist falls asleep and wakes up years later.

Creators Phillip Iscove & Len Wiseman & Alex Kurtzman & Roberto Orci (the latter two co-created FRINGE with J.J. Abrams, also for Fox), who all collaborated on the pilot script, give Rip’s long sleep to Ichabod (Tom Mison), who here is an easy-on-the-eyes hero type rather than the gawky schoolteacher of previous versions. Ichabod is in the middle of fighting the Revolutionary War (on the American side, natch, though his accent is English) when he is attacked by a ferocious mounted opponent. Ichabod cuts the other fellow’s head off and is understandably stunned when the now-headless man keeps up the assault. The earth opens and swallows both of them.

When Ichabod wakes up and digs himself out, he’s in 2013 (this is the Rip Van Winkle aspect, though Ichabod is out of it far longer than his Irving-created kin). To him, Sleepy Hollow is just about unrecognizable, what with electricity, horseless carriages and female police officers, specifically Abbie Mills (Nicole Beharie). Abbie at first thinks Ichabod may be a) crazy and b) responsible for some gory killings. We of course know who – or at least what – is the real culprit.

Happily, SLEEPY HOLLOW doesn’t drag out the disbelief. Abbie has had some brushes with the inexplicable herself – which will no doubt tie into the larger mythos as the story progresses – and soon the evidence of her own eyes forces her to accept Ichabod’s unusual story. Since tales with protagonists who have to convince other people that they’re speaking the truth tend to have exposition scenes that all run together, it speaks well of the new series that they get this all out of the way before the pilot is over.

Of course, there’s still a hell of a lot of exposition to crank out, what with a looming Apocalypse, Ichabod’s wife Katrina (Katia Winter), who’s also still around – sort of, with her exact circumstances providing yet another set of mysteries – what exactly has happened in Abbie’s past and more. There’s so much set-up in the opening episode that it’s not entirely clear what SLEEPY HOLLOW will be like once it can stop explaining and hit its stride.

What can be discerned from the opening hour is this. First, Mison and Beharie are attractive, appealing leads who play off one another delightfully. It’s fun to spend time with them, together and separately. Second, director Len Wiseman (who is also one of the executive producers) creates a nice balance of humor and horror, so that there’s a sense of fear without the kind of rod-up-the-rear attitude that sometimes accompanies it in TV horror. Third, kudos to production designer Alec Hammond, who gets the town of Sleepy Hollow to look intriguingly enigmatic and quaint without going so far as to remove it from modern times. It’s got a folkloric appearance that’s wholly in keeping with the material.

Other bonuses include series regular Orlando Jones, able to convey much in a single glance, as Abbie’s boss, and guest stars John Cho and Clancy Brown. Potential minuses (at least, for some) include some Bible-thumping mythos that has the potential to get very overwrought.

On the whole, however, SLEEPY HOLLOW makes a good first impression, coming off as an inviting blend of THE X-FILES and ONCE UPON A TIME. At this point, it certainly appears worth following.

TV Review: SUPERNATURAL – SEASON 6 – “Like a Virgin”
AMERICAN IDOL Season 10 recap: Another SHOCKER as James Durbin goes ho...
Blu-ray and DVD picks of the week including MONEYBALL
TV Review: SPARTACUS: VENGEANCE - “A Place in this World”