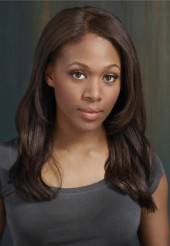 The actress also talks about playing Rachel Robinson in 42 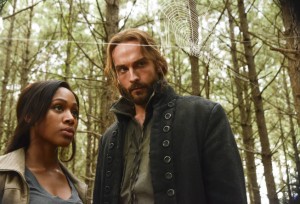 In the small town of SLEEPY HOLLOW, on Fox Mondays at 9 PM, Nicole Beharie’s character Abbie Mills has her hands full. Her law enforcement colleagues and friends are being mysteriously and gruesomely murdered, and then a strange man calling himself Ichabod Crane (Tom Mison) turns up, claiming that he’s been underground in stasis for two hundred and fifty years, but has awakened and is in pursuit of the Headless Horseman. Events soon prove to Abbie that Ichabod is neither lying nor insane, but telling the truth and, worse, the two of them may be all that stands between the world and a Horseman-wrought Apocalypse.

SLEEPY HOLLOW is Nicole Beharie’s first series regular gig, though she’s had guest stints in THE GOOD WIFE and LAW & ORDER: SVU. Earlier this year, Beharie costarred as baseball great Jackie Robinson’s wife Rachel in the biographical drama 42. Other film credits for the Florida-born, Juilliard-trained actress include AMERICAN VIOLET, THE EXPRESS and SHAME.

Beharie is at a party thrown by Fox for the Television Critics Association press tour at the Soho House, which has a rooftop view ofLos Angeles and the Westside that is particularly gorgeous by night. Here Beharie talks happily about her new gig – and on playing the still-living Rachel Robinson.

AX: Is SLEEPY HOLLOW a genre you like as a viewer?

BEHARIE: I love it. I never thought I would have the opportunity. I absolutely love fantasy and sci-fi and action. It’s a lot of fun, because your imagination is allowed to go to places beyond history and domestic situations.

AX: Where do you think the mythology is all going with the Headless Horseman and the Apocalypse and the other world?

BEHARIE: I’m not certain, because they haven’t revealed everything to us. We get tidbits here and there. I’m excited about the idea of an apocalypse where there are all these hidden spiritual things happening amongst our everyday lives. I like that idea, that your neighbor has something going on that you’re not quite sure about, and it actually is a portal to something else. I think it’s really cool.

AX: Do you think you may get to do any sword-fighting as Abbie, given that the Headless Horseman wields a sword?

BEHARIE: I’m toting a gun. I don’t know about you, but swords are kind of archaic.

I actually did a little rapier training. I’ll ask them if they can add that in for Abbie.

AX: Did you have to do any research or learn how to do anything for the part?

BEHARIE: I had to learn a lot of research about procedural cop practices. There’s criminology I didn’t know and learning how to fire a gun – I got to jump over stairs and all this cool stuff, all those things, I did a little bit of training. It’s not something a five-one African-American woman in her twenties gets to do too much as an actress – you’re always playing girlfriends and all that kind of stuff, so you have a completely different set of skills.

AX: You recently played one of the most patient, forbearing wives in history as Rachel Robinson in 42.

BEHARIE: She is a goddess. Rachel Robinson is a very special woman. It was an honor to play Rachel. Actually, sometimes I pinched myself, because there was a poster in my grandmother’s house of Jackie Robinson, and I never imagined that I would have any part in that history and the retelling of that history. It’s just an honor to know that me, Nicki Beharie, actually knows Rachel Robinson. I’ve hung out with her, her birthday was [in July], I called her – it’s just amazing.

AX: Was she happy with your portrayal of her?

BEHARIE: She said that she was. I’m not going to push it. If she is, I’m happy. She’s just a really special person. There’s so much about her that I wish could have made it into the film. She was a riveter, she was the first African-American woman to ever work in a psychiatric hospital in California, she has her own foundation for children – it’s amazing. She’s a really amazing person, she’s not just someone’s wife.

AX: Yeah. A lot of feature films tend to focus on men.

BEHARIE: Yeah. But that’s what I kind of like about SLEEPY HOLLOW, that they are actually featuring a woman as well. Ichabod Crane is clearly the lead character, but there’s also a very strong female partner that gets to explore her past and all the things that she’s questioning, and actually be a part of the fight, not just be sort of a vessel for moving the story along. I really, really love that. It’s rare. [greets passing SLEEPY HOLLOW colleague as he passes] That is one of the [producer-]writers, Phillip Iscove. He’s so amazing, so generous.

BEHARIE: And there’s more – there’s a lot of diversity. John Cho is Asian-American …

AX: Based on the pilot, he doesn’t seem to be in it for very long, though.

BEHARIE: He may come back. [Editor’s Note: Yes, he has come back]

BEHARIE: All of the rules are broken. Everything is being re-told.

AX: Now have you gotten to suggest things for Abbie, like hobbies or character traits?

BEHARIE: Abbie likes to box, she’s very athletic, Abbie loves music. She has a bit of a dark past. She’s had her dark times with substances and all of that. She doesn’t do those things now, but she’s not too far from it. I think some of that will come out in the series.

AX:  How do you see the relationship going with Abbie and Ichabod Crane? He’s a married man, but he doesn’t seem to be getting conjugal visits with his wife, who’s played by Katia Winter.

BEHARIE: Everyone has asked me that question. I don’t know. I don’t see anything saucy happening, but God only knows what could happen, but it’s one of the things I really like about the show, that she’s a woman and it’s not about her romantic interest, about a wife and finding her purpose and all that stuff. I think right now, [Abbie and Ichabod are] both trying to understand what it means to be witnesses to the Apocalypse. I mean, come on, we have bigger fish to fry than a sexual whatever. But who knows? And he’s also married to a witch, and I don’t think I want to mess with that. She’s powerful.

BEHARIE: Have you seen this guy? Yes. That’s going to be a problem [laughs].

AX: SLEEPY HOLLOW is shot in Wilmington, North Carolina. How is working there?

BEHARIE: Wilmington is gorgeous. The locations are amazing and the people are very nice. It’s humid and really hot. I love my home [during the shoot], I think it’s a really cool town and they’ve accepted us. They had a lot of shows shooting there, so they’re like welcoming us with open arms.

AX: Is there anything else you’d like to say about Abbie or SLEEPY HOLLOW?

BEHARIE: I just love that there’s a connective tissue with all the characters. It’s like a spider web. They way that they have written this thing is really intricate and complex and I think that there really is something for everyone. Truly. There’s the romance, the monsters, there are explosions, there’s history for the nerds, the Masonic strange conspiracy theory stuff. It’s a little bit of everything. I’m really proud to be a part of it.