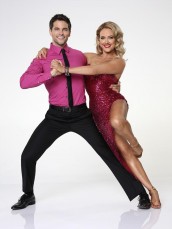 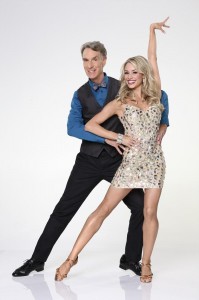 I will say it again…I HATE not having the DANCING WITH THE STARS results show…PERIOD. The show is so anti-climatic and rushed. The suspense is gone. This week was even worse than last week. They basically just said…alright these three couples are in jeopardy everyone else leave the stage, you will dance next week. Ho-hum. We didn’t get to see ANYONE thrilled to be saved! Really? That’s one of the best parts of the whole entire show! ABC get a clue! Bring back the results show now!

In the meantime, Bill Nye and Tyne Stecklein were eliminated while Brant Daugherty and Peta Murgatroyd placed first tonight. We are down to just ten. Fix DWTS before it’s too late ABC! We didn’t really need to see IRON MAN 3 instead last week, did we?

Leah Remini (actress) and her partner Tony Dovolani
Sensual. Goodman loved the chemistry she had with Dovolani. Tonioli declared he is going straight. Inaba said she turned up the steam in her Rumba.
Scores: Inaba – 8, Goodman – 8, Tonioli – 8, Harland – 8

Bill Nye (the science guy) and his partner Tyne Stecklein
Hi-lar-ious! Goodman called his Jazz brave. Inaba was impressed with his improvising. Tonioli said there was no jazz.
Scores: Inaba – 6, Goodman – 5, Tonioli – 5,  Harland – 6

Bill Engvall (comedian) and his partner Emma Slater
A for effort! Goodman said his Paso Doble was his best dance. Inaba said he nailed it. Tonioli said his Lone Ranger is a hit!
Scores: Inaba – 8, Goodman – 8, Tonioli – 8, Harland – 8

Nicole “Snooki” Pilizzi (reality TV star) and his partner Sasha Farber
Definitely better than  last week. Goodman said she surprised him too. Inaba said she blew her away with her Quickstep. Tonioli said she was on fire.
Scores: Inaba – 9, Goodman – 8, Tonioli – 8, Harland – 8

Corbin Bleu (actor) and his partner Karina Smirnoff
He pulled it off! Goodman thought it was a bit hectic, though. Inaba said he nailed his Quickstep. Tonioli said it was impressive.
Scores: Inaba – 9, Goodman – 8, Tonioli – 9, Harland – 9

Valerie Harper (actress) and her partner Tristan MacManus
She struggled quite a bit with this one. Goodman said at least she got through her Cha Cha Cha. Tonioli said she messed up so many times. Inaba concurred, saying she lost her way.
Scores: Inaba – 6, Goodman – 5, Tonioli – 5, Harland – 6

Brant Daugherty (actor) and his partner Peta Murgatroyd
He is really coming along! Goodman called his Quickstep a no stress express. Inaba said it was fantastic. Tonioli said he played the part well.
Scores: Inaba – 9, Goodman – 9, Tonioli – 9, Harland – 9

Who went home: Bill Nye and Tyne Stecklein
Who’s going home next: Maybe Valerie’s time in the spotlight is over. Let’s hope not though!
Who Has Legs To Take Home The Mirror Ball: Amber, Christina, Corbin or possibly Elizabeth. Or even Brant! There is no front runner!