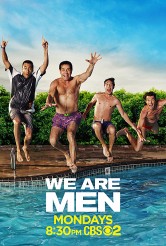 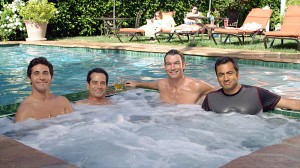 In what should have been the worst TV comedy of the fall season, turns out to be one of the best. WE ARE MEN, for all its awkward attempts at sexist humor, provides the backdrop for what is  the freshest new comedy on any of the networks.

It also is a stand-out among the CBS comedies, because unlike the disjointed THE CRAZY ONES, it feels like a mini-movie. Give credit to creator Rob Greenberg who also directed the pilot. He’s not interested in the normal sitcom conventions, instead he creates a half hour comedy that feels feature length in quality and style. It’s the CBS version of an independent film with some clever writing, funny situations and one helluva cast.

The story follows Carter (Chris Smith) who was recently jilted at the alter by his longtime girlfriend and ends up at a temporary housing complex in Tarzana where he meets three divorced dudes. Both Frank (Tony Shalhoub) and Stuart (Jerry O’Connell) have been married multiple times with disastrous results, while Gil (Kal Penn) is still optimistic he’ll get back with his ex-wife – one and half years after his divorce.

From the clever “five stages of grief” montage at the beginning, to a hilarious moment where the group breaks into a school to play hoops, WE ARE MEN is full of colorful situations and funny moments. There are also many surprises along the way too. Yes, the foursome are sexist and misogynists, but that’s part of the charm of the show, because it gives all four characters some balance. They may be interested in one-night stands (though Carter clearly wants a long-term relationship with the right girl), there are more layers to them than just being shallow horn-dogs.

Strangely, WE ARE MEN is more of a companion piece to THE CRAZY ONES than anything on Monday night. It’s a single camera series and the tone is completely different than the multi-cam shows CBS has built their reputation on.

Hopefully, audiences can see beyond the shallowness of this new series. It’s richly rewarding and with Greenberg’s tone set early on, the show could very well become another comedic breakout hit for the network.