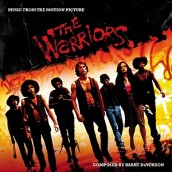 Barry DeVorzon's complete score finally gets to come out and play

Walter Hill’s 1979 gang fantasia was far more an exercise in style than exploitation, even high-minded enough to base its noble punks’ journey back to their home turf on Xenophon’s Spartan adventure “Anabasis.” Not that THE WARRIORS‘ ancient source material mattered to legions of fans still enthralled by the movie’s eye-catching vision of such thematically costumed bad-asses like The Baseball Furies. If anything, Hill’s odyssey from Central Park to Coney Island played more like some futuristic urban action movie, its surreal atmosphere propelled by the rocking synth rhythms of Barry DeVorzon in a score that defined the era’s invasion of electronic music – now representing in its full glory on La La Land’s deluxe edition of DeVorzon’s classic score.

THE WARRIORS has one of the great rhythmic opening titles of all time as a subway propels its anti-heroes to Cyrus’ fateful gang gathering, the main titles zooming into the audience’s face with a 3-D effect that real D has yet to beat. Just as tied into cult memory is DeVorzon’s escalating, cool rhythm and blues, as propelled along by a buzzing, grinding, horror-ready synths, metal guitars and a slight disco beat that’s all about attitude. Now finally started by the eerie twinkling that accompanied Coney Island’s Wonder Wheel, DeVorzon’s opening title rocks out in its full 6:50 glory. That’s but just one of the cool revelations to DeVorzon’s art of blending the synth’s more chilling reaches with a pop beat, the soul guitar-sax rhythm theme that’s introduced in “Graveyard” turning to icy drones, or a “Night Run” propelled by a groove that sounds like “Shaft” as pursued by vampires – a combo that’s not so absurd when you look at how Hill depicts the pursuing gangs as phantasmic figures of the night. DeVorzon’s uses his electronics like piercing sound effects in “Luther Shoots Cyrus,” while the keyboard work of “Train Walk” and “Riff Learns Truth” gives a measure of pensive sympathy to tough guys who are more sensitive than they look. But when it comes down to it, “The Warriors” is all about the rocking main theme, a groove that’s truly kick ass when taking on the snarling overlays of The Baseball Furies. There’s grace as well to the eerie, mournful melody of the “Skater” that turns to a ripping, guitar driven roller boogie beat-down in a subway bathroom. Alternating between atmosphere and action, DeVorzon’s score remains a still-hip highlight in the 80’s fusion of rock and synths for the urban nightmare action film to beat.

As they’ve done on many of their “ultimate” score releases, La La Land is cool enough to include the original WARRIORS album, which offered DeVorzon’s theme-based score pieces with a great collection of r & b and rock songs that would pre-figure Hill’s rockabilly tune tastes for his second great gang movie STREETS OF FIRE.

With the memorable voice of a gangsta Tokyo Rose offering a DJ countdown on The Warriors’ progress, the soundtrack is a tour of the downtown streets, starting the chase with “Nowhere To Run,” making a sexy pit stop with Mandrill’s “Echoes In My Mind,” use roadhouse blues to urge the Warriors along with Johnny Vastano’s “You’re Moving Too Slow,” and paying them honor with Desmond Child’s power ballad “Last of an Ancient Breed.” While DeVorzon and Joe Walsh’s “In the City” became the standout Eagles hit, “The Warriors” arguably best song is Genya Ravan’s “Love is a Fire.” Playing during a memorable make-out session gone wrong with The Lizzies, the hot guitar build and Rayan’s Donna Summer-like voice provide a building bump and grind that’s at once seductive and angry, a siren-like chorus unleashing their true intentions towards the Warriors. An album with equal parts danger and coolness, THE WARRIORS finally gets to show off all that’s great about the rocking synth armies of the night, with Eric Lichtenfeld and Tim Grieving’s excellent liner notes going into the film’s production and controversy, as well as interviewing DeVorzon himself on the creation of his still-hip soundtrack.

Clink on the link to Purchase the THE WARRIORS soundtrack