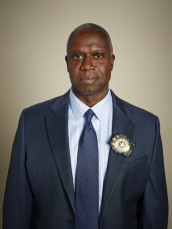 The actor talks doing comedy and the end of LAST RESORT 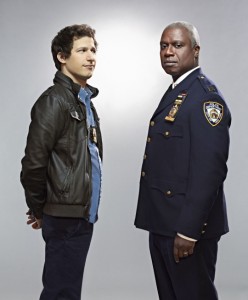 Andre Braugher is a highly respected dramatic actor. He won an Emmy for Outstanding Lead Actor in a Drama Series for his work in HOMICIDE: LIFE ON THE STREET, another Emmy for Outstanding Lead Actor in a Miniseries or Movie for THIEF and was nominated four more times, including twice in a row for MEN OF A CERTAIN AGE. Last year, he played the captain of a U.S. nuclear submarine who in effect stole the boat rather than launch a strike he deemed illegal on LAST RESORT. As a stage actor, the Chicago-born Braugher has a notable Shakespearean resume that includes playing Iago opposite Avery Brooks’ Othello at the Lansburgh Theatre inWashington,D.C.

What Braugher isn’t known for is doing half-hour television comedy, but that may change with BROOKLYN NINE-NINE, which premieres on Fox Tuesday, September 17 at 8:30 PM, and was just voted Most Promising New Comedy by the Television Critics Association. In BROOKLYN NINE-NINE, Braugher stars as Captain Holt, who is new to both the precinct and the rank. His traditional methods are challenged by some of his officers, particularly Andy Samberg’s rambunctious Detective Jake Peralta.

At a party thrown by Fox for the press, Braugher takes a seat with a view overlooking the twinkling lights ofLos Angelesfar below and talks about his new gig.

ASSIGNMENT X: Were you looking to do a half-hour comedy at this point?

ANDRE BRAUGHER: It wasn’t on my wish list, but this is what came down the pike. It was a laugh-out-loud funny script, and it’s expertly helmed by Dan and Mike, so I think it’s what was meant to be. So I didn’t go looking for it – it came and found me.

AX: As an actor, you’re known more for drama than for comedy, albeit MEN OF A CERTAIN AGE was a comedy-drama. Are you funny in real life?

AX: Are you bringing your own sense of humor to Captain Holt?

BRAUGHER: I am. Comedy is really about discovering of tone, a humane tone. It’s the same situation and it could easily be a drama if we just simply turn it up, you know what I mean? I could reach across the desk and choke him, but once again, I think the thing that brings out this comedy is really the humaneness of the characters.

AX: You also played a captain on LAST RESORT. Were you happy with the way that series finished at the end of thirteen episodes?

BRAUGHER: No. I mean, it ended abruptly and we had to scramble to create order where none existed before. But better to end like that than just simply to be told to go home and have it be incomplete. I had a lot of hopes for that series, but unfortunately, it never came together like it ought to have.

AX: You play a lot of people who are in charge in one way or another, but this is two captains – albeit one U.S. Navy and one NYPD – in a row. Do you feel like they’re different enough that you don’t feel like, “Okay, they’re both captains”?

BRAUGHER: I didn’t even remember that they were both captains, so it’s not something that I thought about.

AX: How would you describe Captain Holt? Who is he to you?

BRAUGHER: He’s been an outsider in the police force for his entire career. He’s a superb detective and he’s a committed commander and he’s very much a by-the-book man and his philosophy, I think, is really about developing detectives and creating a precinct that truly serves its citizens, and to do that, we have to be the finest professionals we possibly can, and so he’s very much the mentor in this piece. He comes into an under-performing precinct and he’s committed to making it the best inBrooklyn.

AX: Captain Holt is also an openly gay man. Does that affect how you play him?

BRAUGHER: I don’t think so. It’s one of those [elements] that informs his world view, but it’s not [something that affects the performance]. I get a husband. I don’t know what he’s like, but it ought to be interesting.

AX: Do you prepare to do half-hour comedy in any way differently than you do one-hour drama?

BRAUGHER: No, it’s the same kind of research.

AX: There are some comedy veterans in the cast – Andy Samberg and Terry Crews. How is it working with them?

BRAUGHER: Well, they’re a funny group, all of them, from beginning to end. There’s a different spirit with a comedy. So there’s a little bit of a learning curve from the pilot to the first couple of episodes. But I’m watching these guys like hawks. So I feel like I’m getting on board with the right spirit of the comedy and learning a lot and exploring a new way that works.

AX: How is working with Terry Crews?

BRAUGHER: He’s a madman, but his heart is absolutely in the right place – he’s a standup guy and really enthusiastic and it’s infectious. He came to this whole thing after an NFL career – seven years – and he’s just dynamite at what he does.

AX: Are there half-hour comedies that have made an impression on you?

BRAUGHER: Our house is chock-full of TVs. I don’t think I’ve sat down in front of a TV for years. It’s mostly phones and computers and stuff. I grew up with a lot of those Seventies comedies. THE JEFFERSONS, MAUDE, GOOD TIMES – the first year of GOOD TIMES was superb. It got really stupid really quickly. ALL IN THE FAMILY is a wonderful model of what I consider to be a comedy that grows and matures over time. The meathead son-in-law is always going to be a meathead, but their relationship grows. ROSEANNE was a little bit like that – I watch episodes of ROSEANNE, which I love, because it’s not a simple comedy and people grow and change over time and I love that.