An amusing comedy with a solid cast and great potential 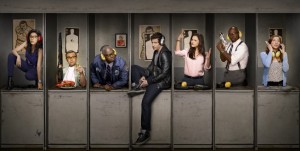 There are some comedy pilots that you know just won’t work, and others that start off strong, but trail off quickly. BROOKLYN NINE-NINE is one of those perfectly good comedies that doesn’t wow in its initial outing, but showcases loads of potential from the cast to the writing and could prove to be a very enduring comedy.

What the series has in its favor on the writing side is PARKS & RECREATION creators Dan Goor and Michael Schur. There’s also a very adept cast spearheaded by former SATURDAY NIGHT LIVE’r Andy Samburg and an amazing ensemble cast featuring a great straight man role by Andre Braugher.

The story has a bit of BARNEY MILLER and a lot of PARKS & RECREATION where the police work is the backdrop to the workplace comedy aspect.

Samburg is Detective Jake Peralta – a brilliant cop who doesn’t know how to grow up. Braugher is his new straight-laced Captain who wants to find a way to make him grow up. There’s Sergeant Terry Jeffords (Terry Crews) who lost his nerve in the field and is now a desk jockey. Amy Santiago (Melissa Fumero) is Peralta’s competition for most cases solved and also a quasi-potential love interest. The rest of the cast characters include somewhat awkward Detective Boyle (Joe Lo Truglio), tough-as-nails Detective Diaz (Stephanie Beatriz) and quirky office worker Gina (Chelsea Peretti).

The first episode finds Peralta and his team trying to solve a complicated case that gets progressively weirder as it goes along. BROOKLYN NINE-NINE isn’t a parody though like POLICE SQUAD. There’s very little reverential winking at the camera as you might expect from something Samburg is starring in. To the contrary, Samburg is quite good, because he’s restrained and in character, while allowed to bring in his quirks to service the story instead of taking over the proceedings.

He’s surrounded by an amazingly diverse and interesting cast of characters as well with Braugher bringing something unique to his role as a very complex Captain. His relationship with Peralta appears to be the heart of the series and it will be interesting to see how these two butt heads and ultimately find respect for each other as the series progresses.

Although the laughs aren’t enormous, they’re more quiet and polished like THE OFFICE and PARKS AND RECREATION. I liked the many layers creators Goor and Schur are going for and am excited to see where these characters will go. It’s been a while since network TV has nailed the cop comedy, with BARNEY MILLER being the last time it worked successfully. I think Fox has a winner on its hands with this show and as long as it continues to evolve and stay quirky, this could be the next big breakout comedy series for the network short of major comedy hits.