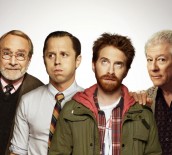 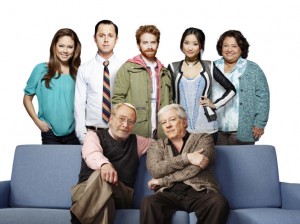 DADS is a comedy about, among other things, two longtime best pals, Eli (Seth Green) and Warner (Giovanni Ribisi), now business partners in an extremely lucrative videogame company, who wind up having their fathers David (Peter Riegert) and Crawford (Martin Mull) move in with them. Warner is married and thinks his father is like a clumsy but well-intentioned golden retriever; Eli is single and sees his father as absent and critical.

Here’s what most people who’ve seen the pilot have taken away from it – our heroes coerce their Asian-American employee Veronica (Brenda Song) to dress up like a Japanese anime schoolgirl character and titter in order to charm some Chinese investors. This starts to work – until Crawford’s racist remarks alienate the investors. However, the day is saved when one of the investors emails Veronica a picture of his genitalia, enabling her to blackmail him.

Quite apart from this, the father/son relationships are more cringe-worthy than heartwarming. Warner’s continual offhand racism makes him seem like an idiot – not a lovable idiot, which was apparently the intention.

The actors are all known quantities and put their best foot forward, but it’s impossible to imagine how any performance, no matter how brilliant, could elevate this material. Seth MacFarlane’s name is on this as executive producer, but he doesn’t have writing credits on the pilot, so perhaps he just waved this on from a distance without taking a close look until it was too late.

If you’re knocked backward by the sweep and scope of unpleasantness herein, you are in company with the majority of the TV press who’ve seen the show so far. If you even understand why some people find this deeply unfunny, you are probably ahead of the folks who made it. If this sounds like something you’d actually like to watch, nobody’s stopping you. Who knows, maybe you’ll even like it, but this is about as much attention as this reviewer can bear to give it.