One powerful vehicle and made in America too! 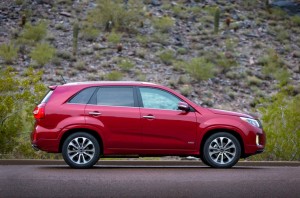 As a major fan of KIA vehicles, particularly the 2013 Sorento, I can safely say that the 2014 Sorento EX is the best car I’ve test driven to date.

Improving on last year’s model (which was quite an impressive ride as well), the 2014 Sorento is perfection. Smooth, sleek and the kind of car that, if I were in the market for a new vehicle, I would snap up in a heartbeat.

What makes the Sorento so fantastic is that it’s a very intuitive car, a very smooth ride, value priced and it saves enormously on gas.

A trip to Las Vegas was used to put the Sorento to the limits. Taking it on side roads, freeways and that endless stretch of mind-numbing empty roads as you head into Vegas, it withstood all the wear and tear of the trip. Dust, high winds and bumpy roads were no problem – the Sorento never wavered and remained a smooth and efficient ride throughout 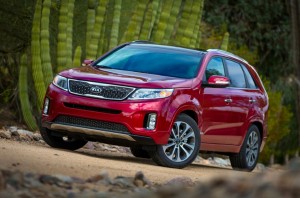 Like all KIA vehicles, the Sorento is a nice looking vehicle. Smooth lines, and feeling more robust, despite its SUV lineage, it doesn’t look too small nor does it look too bulky either.

I particularly liked the fact that there are sensors on the side that warn when cars are passing, so you’re never surprised by a fast moving vehicle when you’re trying to turn into other lanes.

Other pluses – a gas tank that locks, and can only be opened by pressing a button on the inside of the car. 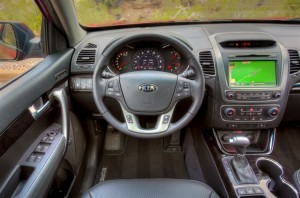 This is where the rest of perfection resides.

The interior is beautiful to look at and the red glow of the lights on the dashboard at nights really enhance the great look of this car.

The seats recline in front, but also, they recline in the back as well, which is an added comfort plus for passengers.

Other values come sin the form of a USB auxiliary and a nice cruise control. There are cold and hot buttons for the front seats to give the driver and passenger side the ability to control the temperatures of their individual seats.

There’s ample space in the trunk, and you can move the seats down in order to give more space for moving larger items.

While I didn’t get a chance to fully test out the new UVO diagnostics, this is one of the major upgrades. It allows you to self diagnose your car, it gives you a parking minder to let you know where you parked, it can store your points of interest and GPS info. And all of this can link directly through an app on your phone. 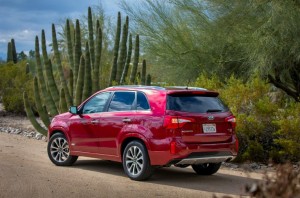 Some SUVs have a hard time withstanding harsh winds and can be hard to manage with abrupt weather changes on long stretches of the highway, but the Sorento weathers the storms rather nicely. It’s a perfect riding environment inside the confines of your vehicle.

The other nice thing about the car is the fact that you barely feel the speed of the car. You can be going 65 MPH and it feels like you’re going 30, so check your gauges.

Again, it’s hard to come up with anything negative to say about the 2014 Sorento. It’s a wonderfully efficient vehicle, and the fact that it actually saves you money on gas is a huge plus for anyone shopping for a new car. Additionally, everyone in the family absolutely fell in love with the vehicle during the week-long test drive.

Plus, it’s made in America, West Point, Georgia to be precise, and that’s another bonus too.

KIA once again improves on already stellar vehicle. You can only expect good things once its 2015 models hit the market. With the bar set so high, I can’t wait to see what’s next for this top-shelf automotive company.