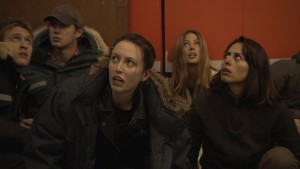 SIBERIA went out with a lot happening in its Season 1 finale “Into the Oven” – let’s be honest, it’s the series finale of the NBC summer series as it will be highly doubtful this promising show will return given the horrific ratings.

But I give NBC credit for not switching its time slot or just burying the rest of the episodes to streaming, although again being honest, what else did they have to put there?

There was a lot right with SIBERIA. I loved the concept of a fake reality show in the same genre as SURVIVOR but that in reality was more of a found footage horror/survival series with a bunch of actors. The concept alone was fresh but the original few episodes actually was believable enough to be a reality show that many viewers raged about the fact they had been duped. I also liked that this was a doomed bunch of civilians from the get-go and that you knew things were going to get bad just from the previews.

Beyond the scope of the premise – which was billed as a cross between SURVIVOR and LOST – it lacked seriously intriguing characters. There were only a handful of people that even had any personality or interest – Johnny (Johnny Wactor), Miljan (Miljan Milosevic), Daniel (Daniel Sutton), Sam (Sam Dobbins) and Sabina (Sabina Akhmedova). Beyond that everyone else was boring or was gone from the show before they had a chance to prove anything. Besides not having a good handful of characters, too many plot holes were here that didn’t need to be, especially in a show trying to gain a foothold with viewers.

As said previously, “Into the Oven” had a lot happening. Irene (Irene Yee) steps on a land mine but it’s OK because Daniel says it’s a dud and she’s just fine. Weird and unnecessary. Suddenly, after the remaining cast members are reunited in the abandoned Russia research facility, they get apprehended by a group of black paramilitary types wanting “the weapon.” Soon, these guys are attacked by the weird voices we have been hearing throughout the show and the cast members snag their truck and get outta there. 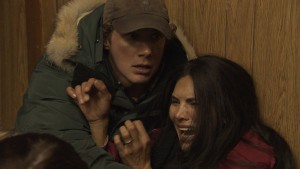 After Esther (Esther Anderson) steals the truck because she stole the money that was being offered in the reality show, the others make their way to an abandoned town that has been evacuated. They hole up in a small apartment that mysteriously still has power and the original host from the first two episodes shows up saying “You’re not supposed to be here.” End scene.

Weird. And we are left forever with a slew of unanswered questions including: