sleepy hollow review for the triumph of evil

TV Review: SLEEPY HOLLOW – Season 1 – “For the Triumph of Evil”

Builds up both character and supernatural mythology while being consistently entertaining 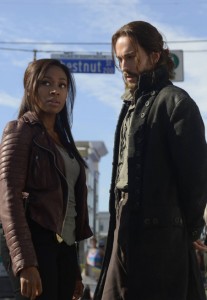 Fox’s SLEEPY HOLLOW, three episodes in, looks like a winner. The show’s tone is somewhere between THE X-FILES and SUPERNATURAL, even evoking the joy of the original classic NIGHT STALKER. The characters have a proper sense of dread and respect for procedure, but they’re perfectly willing to call a nightmare demon a nightmare demon and get straight to wondering what to do about it. It’s a perfect zone of just serious enough, but still able to find grins at regular intervals.

In “For the Triumph of Evil,” Ichabod (Tom Mison) and especially Abbie (Nicole Beharie) find themselves up against a Mohawk dream demon. As young teens, Abbie and her sister Jenny (Lyndie Greenwood) saw the creature in the woods and lost four days. The difference was that Abbie later denied what they had seen, while Jenny insisted on the reality of the monster and was institutionalized as a result. Jenny has long since refused to speak to her sister as a result of that betrayal.

Now Jenny’s former psychiatrist demands that Abbie, in her capacity as a police lieutenant, show up at a building site where the doctor is preparing to jump. Abbie talks to the suicidal woman, whose eyes are white. The psychiatrist makes a few dire pronouncements, then jumps to her death. When the man who found Abbie and Jenny – and also saw, then denied seeing, the demon – likewise kills himself, Ichabod and Abbie find out they’re dealing with an evil spirit (one of the heralds of the Apocalypse) who goes after people who stood by silently when others needed help. On advice from a Native American non-shaman (Michael Teh), who is at first offended that Abbie and Ichabod would assume he knows anything about the legend, our heroes enter the dream realm to combat the demon. Abbie confesses to letting her sister down and, in the dream, the demon turns to glass, enabling Abbie to shatter it.

Abbie and Ichabod now seem safe from the demon – but when Abbie goes to visit her sister and make amends, Jenny is gone from her locked room.

This is a good cliffhanger, as it is of urgency to our heroine and neither she nor the audience knows what’s happened. Overall, the episode is studded with strong moments, from an eye that explodes into sand to the appearance of the creature to the consistently enjoyable banter between Abbie and Ichabod. There’s also a surprisingly effective exchange where Ichabod is shocked to hear that Native Americans no longer have their own powerful nations spanning the continent, and Abbie registers his reaction as a gut punch.

In its pilot, SLEEPY HOLLOW looked like it could be enormous fun once it got that initial ton of exposition out of the way. In “For the Triumph of Evil,” the exposition has been tidily stowed and the show is living up to its promise.